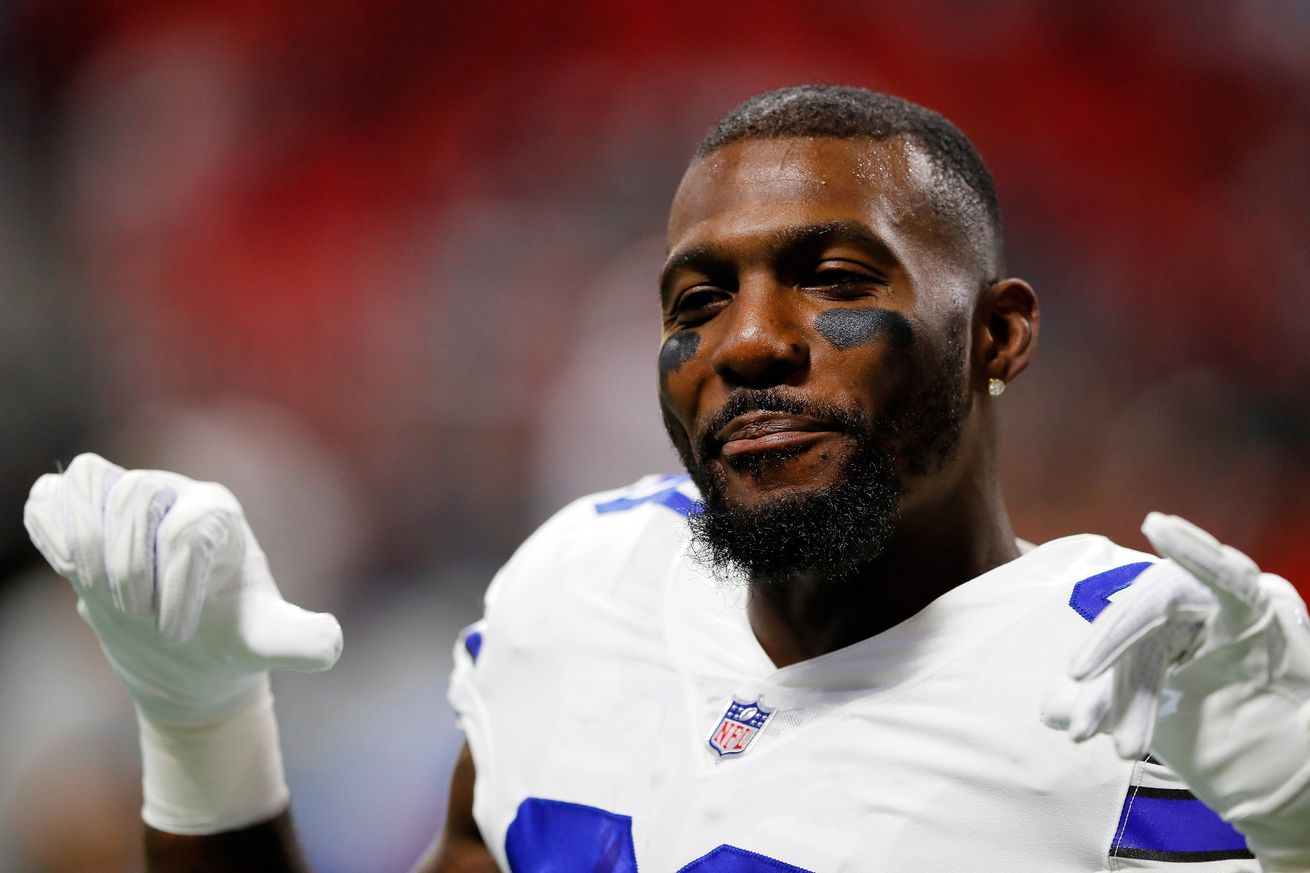 Here’s the latest on what Bryant and his former team have said about each other.

Dez Bryant has been a free agent since the Dallas Cowboys released him in April. Bryant has mostly stayed out of the headlines since, other than when he reportedly declined a multi-year offer from the Baltimore Ravens. That changed this week as training camp started up around the NFL.

First, the Cleveland Browns publicly acknowledged that they have had discussions about adding the veteran wide receiver — a pairing that might seem like a joke, but actually makes a lot of sense. Then, the interest seemed to ramp up on Friday, when Ian Rapoport and Mary Kay Cabot both reported that the two sides could meet, and potentially get a deal done, soon.

Shortly after, Bryant made waves, but it didn’t have anything to do with a new team. Instead, it had to do with his old team, the one he had played for since it drafted him in the first round in 2010.

Because nothing signals the return of football quite like a Twitter beef, let’s go over what happened:

Courtesy of Blogging the Boys: Bryant’s criticism of the play-calling — not an uncommon complaint among Cowboys fans — is directed at offensive coordinator Scott Linehan.

The full Jones quote, with the passing line about Bryant (and former tight end Jason Witten) is here:

Dallas Cowboys EVP/COO, Stephen Jones full quote on the biggest strides he would like to see Dak Prescott make in year three pic.twitter.com/NaXUeV1dXl

Jones expanded on his thoughts after Cowboys practice Friday:

“You’ve got great players like Dez and Witten – they want the ball. Everybody sees it, it’s on every team,” he said. “The great players, the great receivers, the guys who catch the ball, want the ball. They let their quarterbacks know that sometimes. I was a quarterback, I understand that. But certainly in no way was it intended to be negative.”

Bryant hinted that center Travis Frederick and linebacker Sean Lee were involved in his release from the team.

He’s not clueless.. Jerry was the only one who was clueless.. shit was a planned to get me out ask Travis and my brother snake Lee I mean Sean Lee https://t.co/7BK9cEkW90

He had more bite reserved for Lee:

Yea he suppose to been my brother .. we laughed talk about goals and stuff he sat right across from me in the locker room..never thought we had a problem.. I got cut.. he was the first to know.. I find out he was also behind it Damn!! https://t.co/KgNfu9f2uU

This isn’t the first time Bryant has suggested that some of his teammates — he named them “Garrett guys” after the Cowboys head coach — were helping to get him off the team:

“I won’t put no names out, but they know and I want them to know,” Bryant told NFL Network’s Jane Slater after his release. “I’ll shoot them a text message and let them know. Little do they know is, you know, they can wear that ‘C’ all they want to, but in that locker room … they know who they communicate with. Everybody knows where the real love is at. I’m not throwing anybody under the bus, but that’s the difference between me and them.”

Both veterans said no one consulted them when it came time for the Cowboys to cut ties with Bryant.

Frederick said he had no input in the decision and valued Bryant as a teammate, via DallasCowboys.com:

“I think I’ve definitely been on record saying that I thought Dez was a great teammate. I would’ve argued he was one of the best teammates I’ve had,” Frederick said. “He’s a guy that has taught me a lot. I’m not sure where he’s coming from there.”

“First thing: to say that I can get anybody off the team and have any input on the roster is absurd,” Lee said. “Second thing: I love Dez and I want the best for him. To be honest, we did butt heads, because I wanted Dez to be more accountable to this team and his teammates. And to be honest with you, a lot of the team felt that way. I think he needs to look at himself and hold himself accountable.”

But Bryant still loves the Cowboys — and Jerry Jones

Bryant promised he didn’t hold any ill will against the team:

Exactly I don’t why they are concerned about me.. I’m a cowboy fan… my time was up and we should just leave it at that https://t.co/T9XpBFQeP4

And he gave a quick shoutout to Prescott, running back Ekeziel Elliott, and wide receivers Cole Beasley and Terrance Williams:

Last thing… I always been @dak @EzekielElliott @Bease11 @TerranceWill2 I can’t tag everyone but you know who you are # 1 supporters and still am.. I want them to achieve everything they got they mind on

Bryant has always had a special relationship with team owner Jerry Jones, and that didn’t end the day Bryant stopped being a member of the Cowboys.

“Dez and I share a personal and professional relationship that is very strong, and he is one of just a handful of players with whom I have become that close to over the past 30 years,” Jones said following Bryant’s release.

I love Jerry just not the others https://t.co/RnXCxpA4Xv

Jane Slater talked to Bryant and said that contrary to how things looked, Bryant wasn’t angry. He was more just fed up with how he felt the Cowboys were portraying him:

When Dez tweets…What Dez Bryant told me this afternoon following his response to a Stephen Jones interview with Sirius XM pic.twitter.com/b3jU6Yfyuw

It’s clear from his tweets that Bryant felt disrespected:

I’m not looking for nothing.. so let’s set the record straight… I just decided not to take no shit from anybody anymore.. go rerun the summer.. I haven’t seen or talked about my future with the Jones all summers last day of free agency I got cut.. no fool here..@ me next time https://t.co/Pvm94jrUkV

And he maybe started a new meme in the process — or at the very least, “sir go to work and get off Twitter” should be the next big meme:

Trust me I’ve been let it go.. I suppose to sit and shut up whenever some one is trying to tarnish my name … DEZ BRYANT IS A BUSINESS .. sir go to work and get off Twitter https://t.co/9N9aQGWNws

Bryant AND the Cowboys regressed in 2017

The Cowboys took a step back in 2017, particularly offensively. Prescott couldn’t match his Offensive Rookie of the Year season, Elliott was suspended for six games, and the team went from 13-3 and a No. 1 seed to 9-7 and missing the playoffs.

Bryant played all 16 games last season, for the first time since 2014. He also led the team in receptions (69), receiving yards (838), and touchdown catches (six). But none of those stats are spectacular, and they’re far off from his 2012-14 peak, when he was averaging more than 1,300 yards per season and double-digit touchdowns.

Here’s the drops by TE. The most drops (any position) in 2017 is 12 Dez Bryant. pic.twitter.com/neL1conzPK

And it’s true that Dak-Dez pairing wasn’t working for the Cowboys. In April, Thomas George for SB Nation said a Cowboys source told him that they didn’t feel like Bryant was helping Prescott grow as a quarterback:

Sure, Dez Bryant is no longer a Cowboy because his salary cost too much. Because his production had dipped. Because he turns 30 this year and age and injuries were factors. Because his “distractions” and emotional outbursts in games, in the locker room and beyond grew tiresome.

After he was released, Bryant said he would like play for another NFC East team so he could get a chance to play against the Cowboys. That seems unlikely to happen, though Slater said that an unnamed team — not the Browns — was interested in Bryant and wasn’t put off because of his tweets.

But by turning down the Ravens’ offer, Bryant made it known he wants a one-year “prove it” deal to show he’s still the player he was back when “Did Dez catch it?” became a saying. One team will sign him, and probably pretty soon.

We’ll just have to wait and see if he’s still got it, and if the Dallas offense can rebound.

I’m just waiting to say I told you https://t.co/mvXRoNmUFY

Bryant is obviously not counting on the latter.

How to Protect Your Brand on Amazon

James Thomson GUEST WRITER Partner at Buy Box Experts Opinions expressed by Entrepreneur contributors are their own. More than 300 million customers shop Amazon today — surely such an opportunity to access so many new customers would be enticing to most brands. Yet, for leaders of recently launched brands, there is usually consternation around what to do with the Amazon channel. […]

Lamborghini just unleashed the ultimate version of its flagship Aventador supercar and it's $518,000 of Italian fury

Lamborghini The new Lamborghini Aventador SVJ supercar made its debut on Thursday in Monterey, California.  The SVJ is the latest update to Lamborghini’s flagship Aventador. It’s powered by a 770 horsepower, naturally aspirated V12 and boasts a top speed of more than 217 mph. The most significant updates to the Aventador is the addition of […]