GARDENA, California — I’d like to think I’ll someday come to terms with the fact that there are cars I will never get to drive. No amount of gladhanding, schmoozing, and chance encounters are going to score me a seat in uber-rare cars like the McLaren F1, 993 GT2, or Mercedes-Benz CLK GTR.  Add to this a tablespoon of “one-of-one” with two cups of “historical significance,” and I can forget about even riding shotgun without a thick envelope of cash.

Hope is a tenacious bug, and just as I round the corner toward recovery, I drive something neat, and the cycle of self-destructive daydreaming begins anew. My most recent relapse was at the hands of the 1967 Shelby GT500 Super Snake, a car that didn’t technically exist in production form until earlier this year. 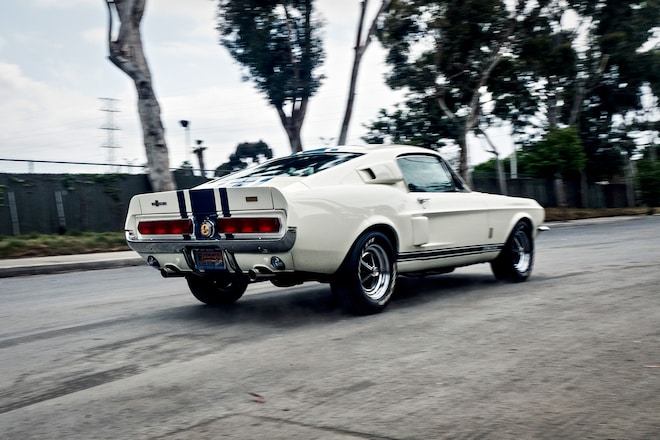 Maybe “exist” is the wrong term. The history of the ’67 Super Snake is certainly real, a tale widely circulated among Shelby faithful in the fifty years since the prototype was built. In 1967, Carroll Shelby was tapped by Goodyear tires for an exhibition aimed at drumming up publicity for its new Thunderbolt tires. Shelby sales manager Don McCain saw this as an opportunity, and convinced Shelby to create a one-off prototype GT500 fitted with a herculean 427 (7.0-liter) V-8 plucked from the Ford GT40 racing program.

This hyper-rare heart was decked-out with Le Mans hardware, including aluminum heads, aluminum water pump, uprated rods, and forged crankshaft. Compared to other big-blocks, this lump liked to rev-out, designed to handle climbs to 6,000 rpm for the duration of Le Mans in the back of a Mk. II GT40. Along with an industrial-grade rear-axle, transmission and an external oil cooler, stiffer shocks and springs were installed on the passenger-side for the five-mile oval at the San Angelo test track. 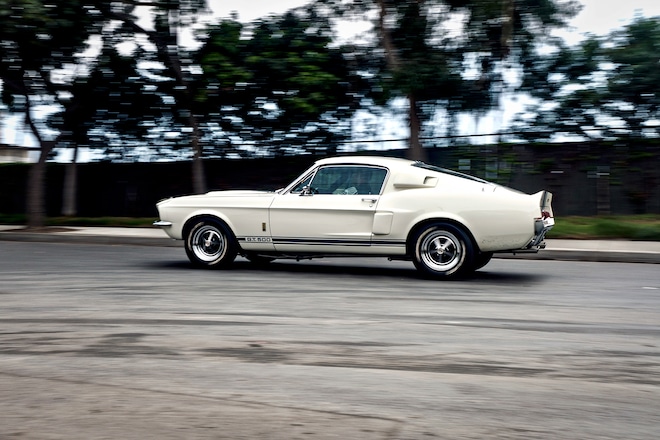 Shelby himself took the Super Snake up to 170 mph with a journalist in the passenger seat, as the legend goes. Shortly after, a Shelby test driver crushed 500 miles around the oval, averaging 142 mph and successfully demonstrating the reliability of the new Thunderbolts. Demo over, the Super Snake sat in the showroom of Mel Burns Ford as McCain petitioned for a limited run of 50 cars. With a projected price running double a regular GT500, the program was scrapped and the prototype was sold into private ownership.

50 years later, the Super Snake has returned–in a sense. In Shelby American’s words, it’s just completing Carroll Shelby’s “unfinished business” by producing ten blue-over-white ’67 GT500 Super Snakes for public consumption. Before his passing, McCain was an enthusiastic advocate for the program, burnishing ten of the traditional commemorative dash plaques with his signature. 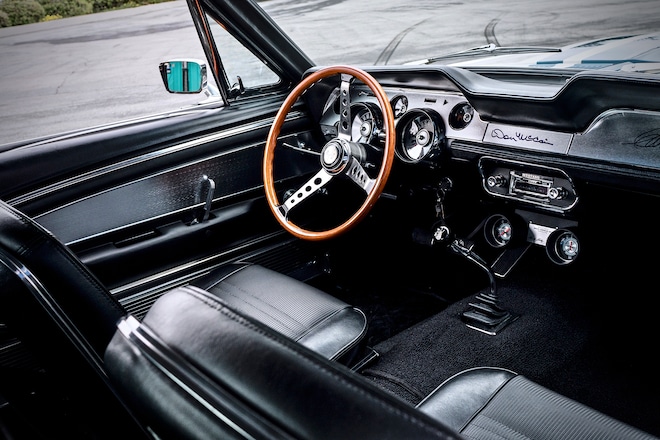 Each “new” Super Snake begins as a real 1967 Mustang, which gets stripped down to the metal and refinished with the appropriate bodywork and Shelby regalia, including the tri-pronged blue racing stripe that was exclusive to the prototype. You can source a legit period-correct 1967 Shelby fastback for the conversion if you’re so inclined, but please don’t do that.

The market isn’t exactly lousy with Le Mans-ready mid-riser 427 FEs, so the SS’ 427 thumper comes from the aptly-named Carroll Shelby Engine Company, available in both aluminum and iron block. A riotous 550 hp is sent through the four-speed Top Loader manual transmission, backed by a nine-inch Detroit Locker with a 3.89 gearset. 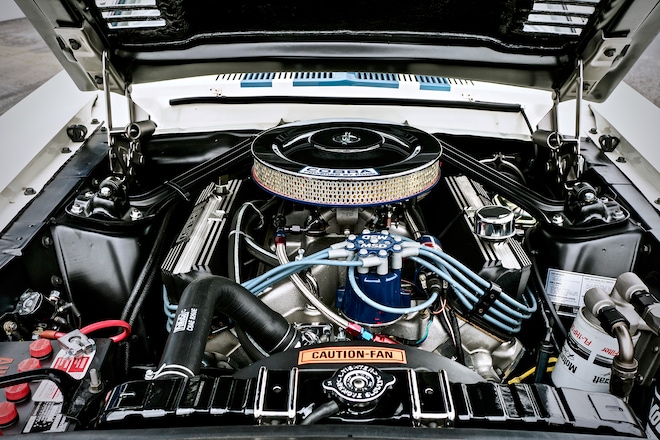 I arrive at Shelby’s Gardena office park just as acrid smoke clears from the corner of the empty lot. Chunks of rubber and dark patches litter the concrete, the freshest of which were provided at the hand of Shelby president Gary Patterson. I’m fairly certain the ten forthcoming Super Snakes are consigned to sleep between the padded walls of glossy, Americana-adorned garages, so it’s nice to see some abuse before the Shelby-branded kid gloves come out.

The 427 sounds mighty in a way modern muscle just can’t seem to crack, spitting out a baritone metallic chop that resonates in your chest. Even fresh from the workshop, the presentation commendably vintage, incorporating as little modernization as possible. This means leaf springs and rear drums, put to pavement by Shelby five-spokes wrapped in thick Goodyear Eagle GTs. The fit and finish is as you might expect it from the factory fifty years ago, replete with exposed screws, vinyl coverings, and applied decals. Don’t interpret this as any sort of derision–in a sea of tedious and alarmingly similar restomods, the originality of the Super Snake is charismatic. 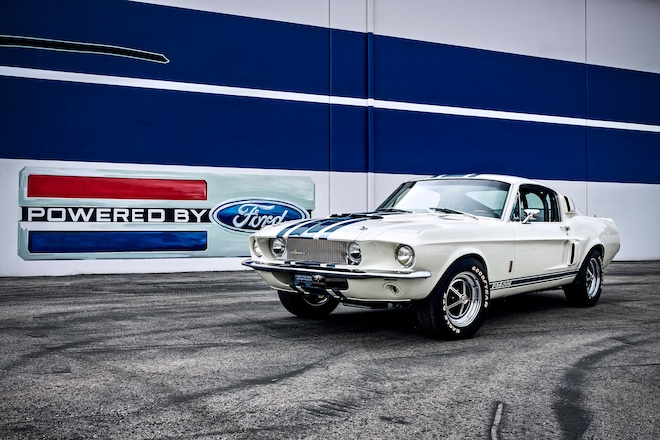 Horror stories and somber warnings follow classic cars around like some sort of unshakable miasma and so far, I’ve yet to fall for a jumpscare. You’ll hear that 1970s Lamborghinis drive like trucks in traffic (they don’t), that vintage 911s are out to kill you (they aren’t), and the legendarily reviled Peugeot-Renault-Volvo V-6 is an awful engine, no matter the market (it isn’t). You’ll also hear that clutch springs on vintage big-block bruisers are hewn from bedrock, and that pedal effort is so great that you might as well try to leg press a bus.

Chalk it up to undisclosed modernizations, but the Super Snake’s third pedal was butter. The same can’t be said for the Toploader shifter, which had a long and balky throw. No problem–this is authentic experience, after all. The steering was light and surprisingly responsive, at least for some Detroit iron with five-decades under its belt. Once considered stiff, the ride is now supple in an age of hunkered-down track specials. 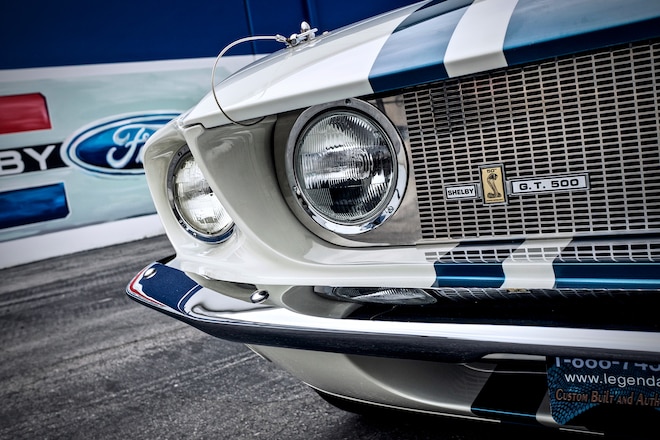 Of course, like all muscle cars worth their carb floats, it’s all about the engine. With 550 naturally-aspirated horsepower on reserve, the Super Snake is tremendously fast while its agricultural suspension setup and skinny high-profile tires turns the throttle into unexploded ordinance. In other words, be careful–especially when turning. I suspect that even with tackier rubber out back, it would still dance, as power is both immediate and vicious. Contemporary tests of the regular GT500 saw high 13s in the quarter mile–the Super Snake feels a second or two off of that.

There’s a final part to the Super Snake legend I didn’t mention. After changing hangs multiple times over the decades, the car sold at auction in 2013 for a heavy $1.3 million. In contrast, the continuation Super Snakes sticker for $249,999. Surely, that’s a lot of cash, but for just nineteen percent of the cost, you can have one hundred percent of the fun without worry of horrendous depreciation and loss of originality.

Understanding Compliance Training Almost every business needs to act in accordance with some or another regulation. There are countless regulations that businesses have to conform to. A lot of regulations are universal in nature, a few are specific to an industry, and others are specific to employee classes. Whatever the nature of these rules; it’s […]

Coventry University is to open a campus in Wrocław, Poland, its first international campus, with courses due to begin in September 2019. The university said it seeks to meet demand for flexible learning – whereby students can study whilst working part-time, helping them to fund their studies. “For the first time a renowned foreign university […]

Qualities Of A Brilliant Salesperson Who Closes Deals

20 Qualities That Make A Great Salesperson- The only way to make it in this economy is to be great, because “it’s the only thing that pays,” according to Grant Cardone, check out these 20 tips that will make you a great salesperson. Follow These Six Steps And You’ll Close Every Deal- Most successful entrepreneurs […]