Unlike categories such as dive watch or pilot’s watch, there is really no class of timepiece identified specifically as a travel watch. What there is instead are certain models equipped with features that make the whole business of moving about our planet more convenient, and within that group are a subset that also make it far more stylish.

Whether you are taking an outing for business or you are going away on vacation and you decide, for safety’s sake, you are only going to take one watch, that piece needs to be a versatile one. It will be required to look as at home on the plane as it does in a fine restaurant, blend in in the boardroom as well as on the golf course.

It is a lot to ask of a single model, but below we’ve highlighted several of our favorites that do a great job of being all things to all travellers.

Read on and happy trails. 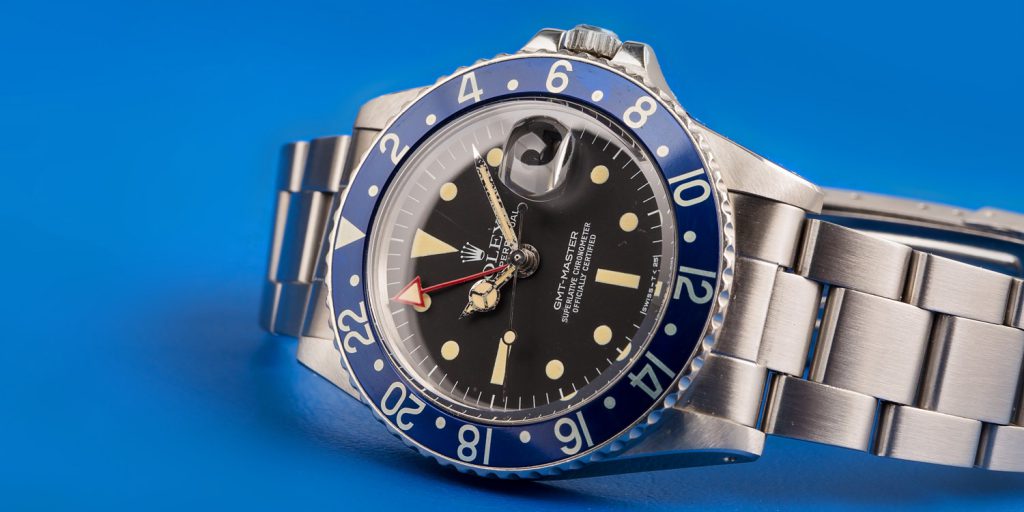 There might be a better place to start when talking about high end travel watches, but nothing springs to mind like Rolex’s legendary dual time zone masterpiece.

A fixture in the lineup since 1954, the GMT-Master series has since gone the way of all Rolex’s core family—a gentle aesthetic evolution, powered by an ever-developing range of engines that rank as some of the most accurate, resilient and technologically advanced movements ever made. 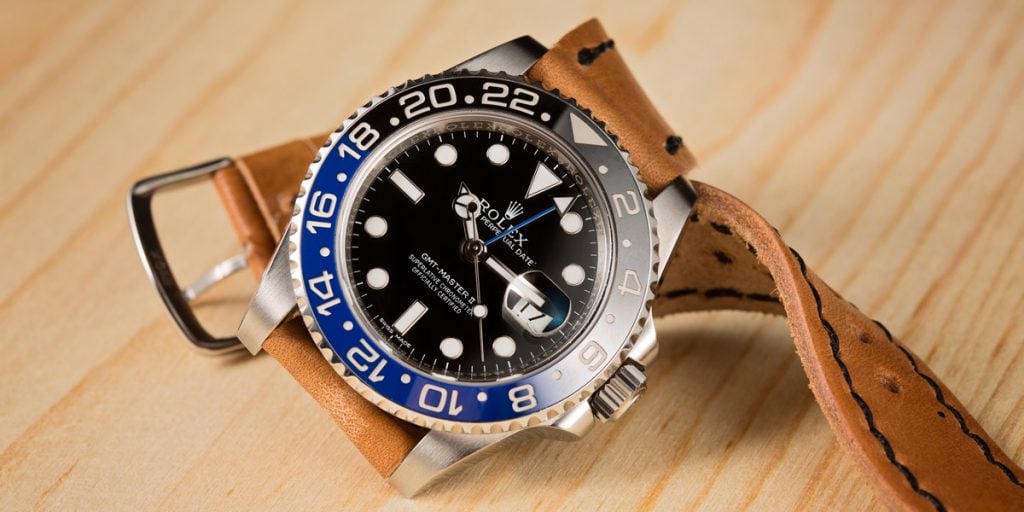 The GMT Master II Batman is a solid travel watch

Key to much of its success has always been the range of eye-catching color schemes on the rotatable 24-hour bezel. Starting with the red and blue ‘Pepsi’ original, via the now vintage-only black and red ‘Coke’ surround, recent years have brought us the blue and black of the ‘Batman’ and this year, praise be, saw the return of the seventies-tastic ‘Root Beer’ with its brown and black livery.

Although it is no longer the brand’s flagship travel watch, we have chosen the GMT-Master over the newer Sky-Dweller series for its more incognito qualities. Having an overtly expensive watch, as the Sky-Dweller is, can be a liability in the less safe parts of the world. The GMT has the twin advantages of being more low-key while also being undoubtedly a Rolex—and therefore something that can possibly be traded if needs be to dig you out of a tricky situation. 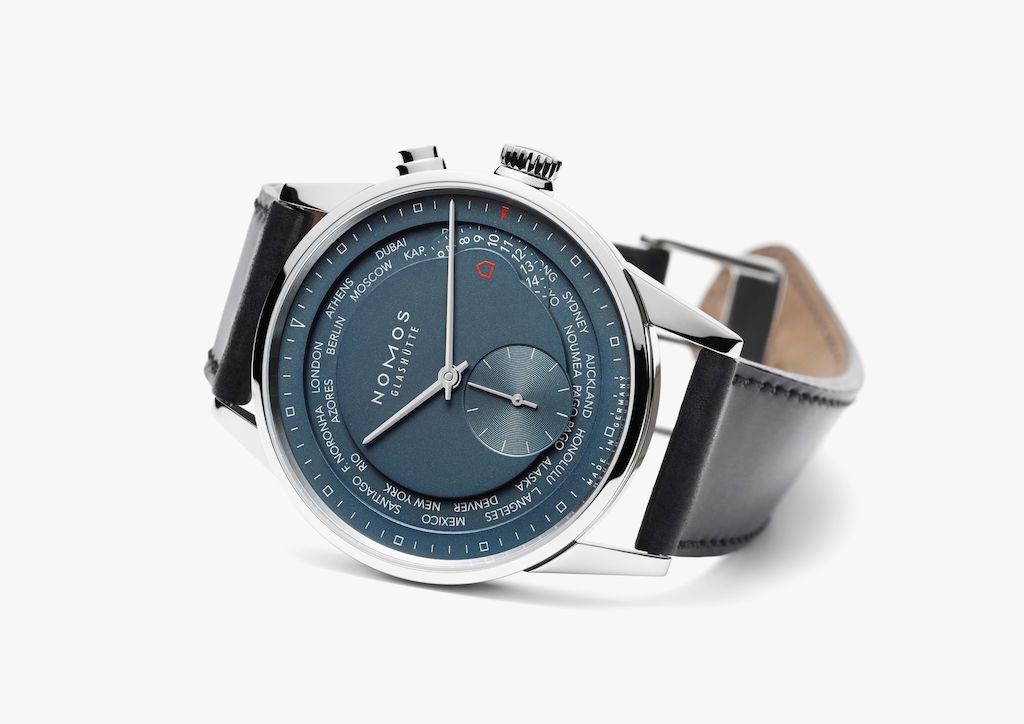 The design of many world timers can slip into an overabundance of information, leaving us with a very busy looking display that struggles to be legible. The NOMOS Zürich, by comparison, is an elegantly minimalist effort, or as minimalist as a watch that displays the time in 24 different cities can be.

In fact, despite the name, the NOMOS is not a true world timer. Rather, it is a GMT with a 24 time zone ring around the outside, meaning it can only show the time in two places simultaneously.

Not a criticism, just an explanation and it has the advantage of only needing a beautifully clean, modern-looking dial that doesn’t overwhelm to do what it does.

What’s more, it really couldn’t be any easier to operate. Like all NOMOS products, it is powered by an in-house movement, the DUW 5201, the most advanced caliber as yet built by the German manufacture. Based on the NOMOS Glashütte Xi, the first to feature their patented swing system escapement, the extra complication required an additional 46 components, half of which were invented specifically for this watch. 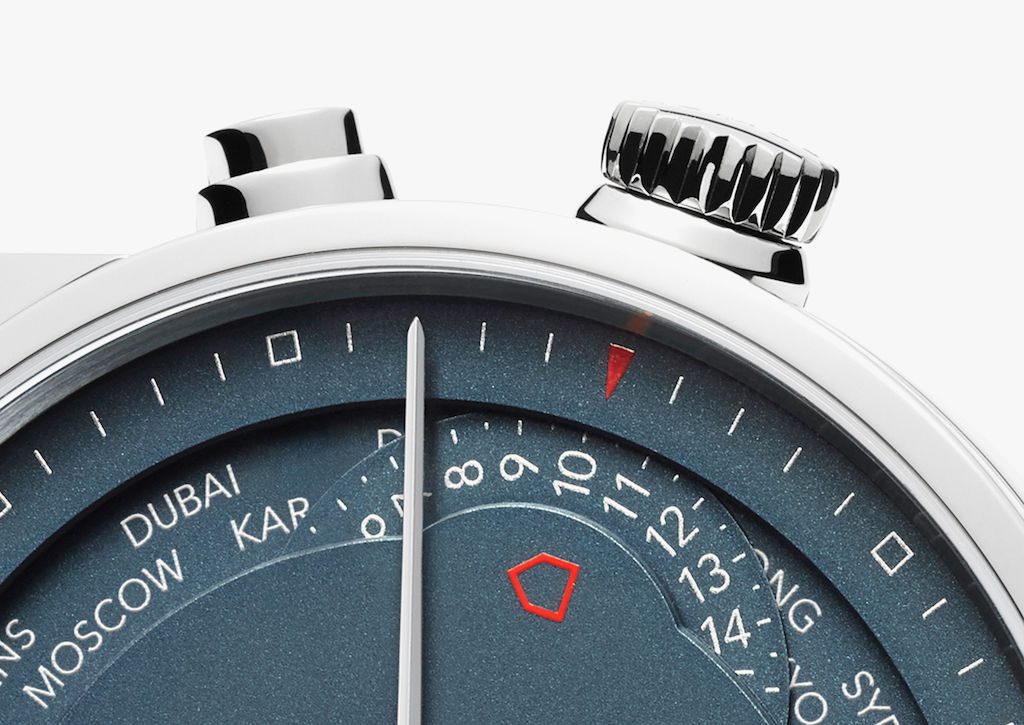 The details on the Zurich Worldtimer travel watch

It means changing the time zone is done by simply pressing the button at the two o’clock position, which jumps both the hour hand as well as the tiered city disc. Your location is then displayed under the 12 o’clock index, the local time indicated by the main hour hand, while the time in your ‘Heimat’ or homeland, is shown on the small supplemental disc at 3.

It is a sophisticated solution to the challenge of presenting so much with so little, and it is all wrapped up in NOMOS’s typically Bauhaus-inspired visuals.

At a whisker under 40mm in diameter, it is also the largest model to emerge from the Saxony HQ, as well as one of the priciest. The NOMOS Zürich Worldtimer, available with either a white or blue dial, sells for around $6,100 from one of the just five dedicated retailers in the U.S. 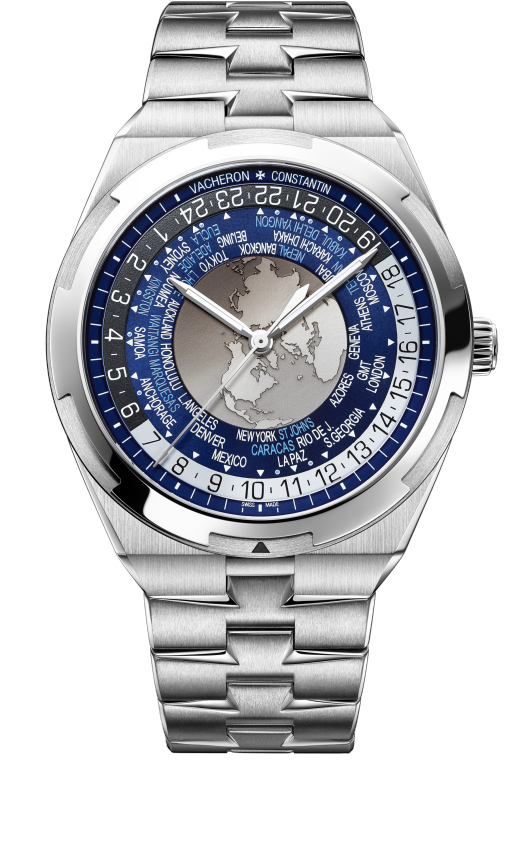 Winning the title for most functionality out of our three beauties, or indeed any world timer, the Vacheron Constantin Overseas World Time is a true travel companion, simultaneously displaying not just 24 time zones, but 37—including those with mere quarter or half hour differences.

One of the brand’s Overseas collection, which also includes an automatic chronograph and an ultra thin perpetual calendar among others, the World Time is an unashamedly luxurious addition to the travel watch genre, and is finished with some exquisite detailing.

At the center is a Lambert projection map of the globe, as used in aeronautical charts, that picks out the continents in a satin-brushed sunburst finish and the oceans in velvet. Encircling that is a transparent lacquered disc with the 37 city names, while a third plane is overlaid with a subtly graded tint to act as a day/night indicator. Enclosing it all is another translucent disc to indicate the hours and minutes in each time zone. 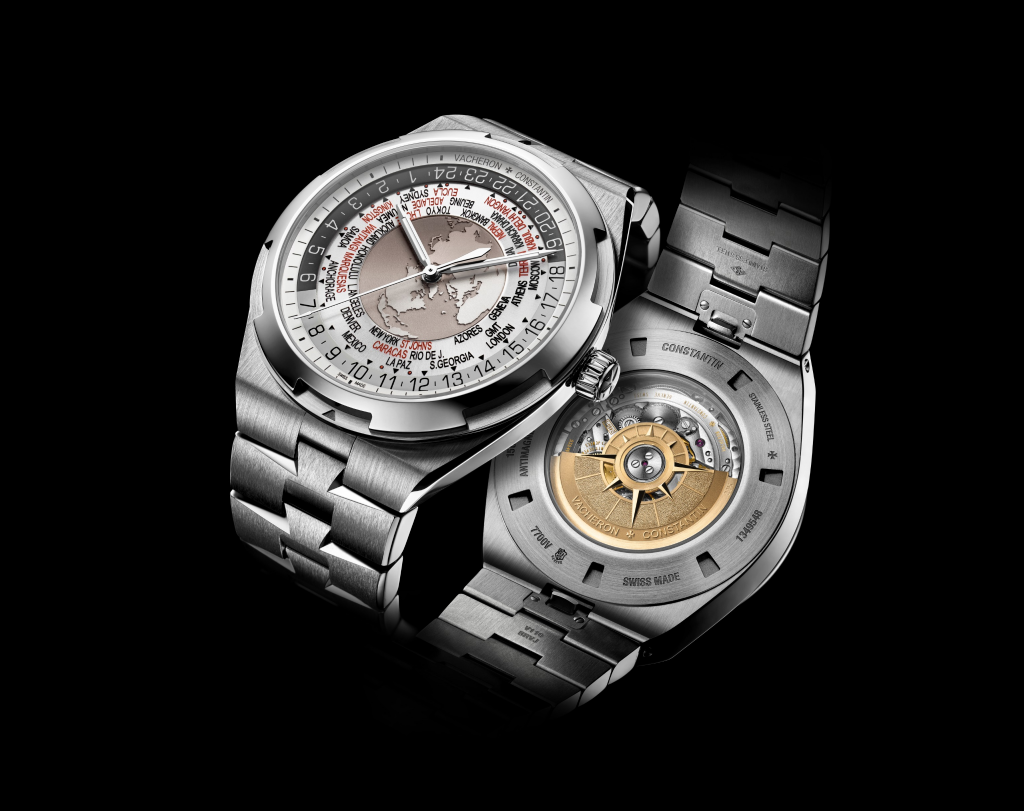 It’s got a busy dial, but the Vacheron Constantin World Time is worth taking a closer look at

To present that much information in a readable way has led Vacheron Constantin to take the World Time up to 43.5mm in diameter, leaving it with certainly a busy dial, but one that is by no means overpowering. There is a nice balance to the legibility and it is an overall handsome watch, with a great sense of flexibility.

Inside, and visible through the display case back, is the automatic caliber 2460WT, a movement that has been giving excellent service since it debuted inside the Patrimony Traditionnelle World Time from 2011. Shrouded in a soft iron cage to protect it from magnetic fields, it beats at 28,800vph and gives a 40-hour power reserve. It has also been awarded the prestigious Geneva Seal, one of the highest accolades in the industry.

As you might expect, this is no budget offering. The Vacheron Constantin Overseas World Time comes in a choice of three dial colors (blue, brown and silver) and sells for somewhere in the region of $40,000. But for that price, VC is good enough to throw in two complimentary straps in leather and rubber to accompany the fine-looking steel bracelet with its semi Maltese Cross-shaped links.

Facebook Ads is complicated. There’s no getting around that. There’s a big learning curve every step of the way. You have to get used to the interface, learn best practices, understand the targeting system, and make calculated decisions based on bids, placements, and so much more. Then, once you learn all this, the hard part […]

Why Entrepreneurs Are Starting Their Own Companies

8 Reasons Why Entrepreneurs Started Their Own Businesses- Whether that is a desire to make some small corner of the world a better place, or the feeling that you could be the one to perfect a certain product, you’ll need to hone in on that deeper motivation to be successful. Check out these 8 reasons […]

How to Accept Credit Card Payments in Retail: A Complete Guide

If you’re not accepting credit cards in your retail store, you’re missing out on many sales opportunities. Consider the fact that as of 2015 just 32% of consumer transactions with made with cash, compared to 40% in 2012. We can expect this downward trend to continue as more and more people use credit cards and […]