Let’s be real and say that men don’t always have the best aim, and if you have young boys in the house, you know that it starts at a very young age.

There’s nothing more disconcerting than stepping away with a damp sock or worse even though you remind them, “If you sprinkle when you tinkle, please be neat and wipe the seat.”

It’s not a hard concept to grasp, but yet the battle still rages on, a battle that mom of three Kristina Kuzmic is all too familiar with.

She shared a of the “love notes” she leaves for her family, and it went insanely viral as women everywhere said, “SAME.” 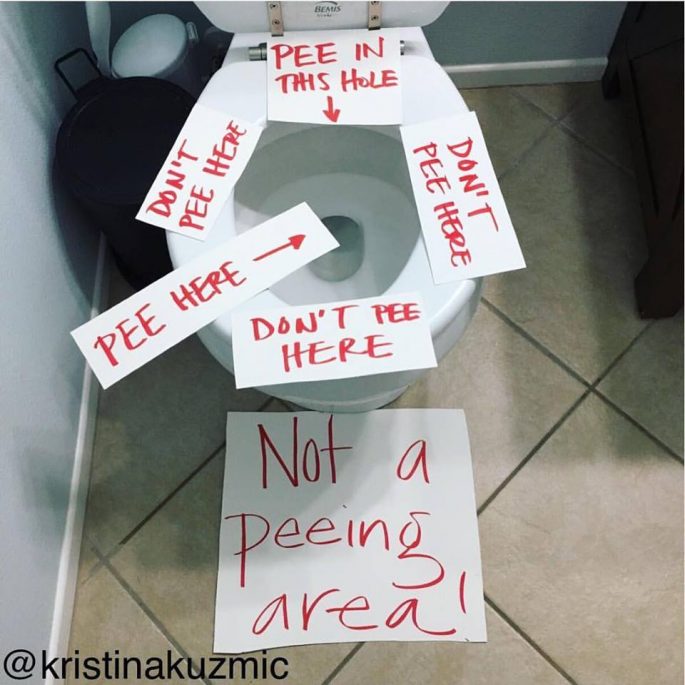 “Make these laminated, with a adhesive base on the back, and I am sure any woman that lives with men will buy these!!!!”

“I taught my boys (all 4 of them) to sit and there is no mess, just because they can doesn’t mean they have to. Their wives will thank me someday.”

“The sad part is, you need to do the same thing for adult men too. That’s why i don’t go deer hunting anymore. If he can’t hit a toilet that is six inches in front of him, i’m not going in the woods with him and a high powered rifle. Period.”

Speaking of those adult men, they contributed their two cents as well:

Getting a little bit cocky in comparing yourself to a garden hose there, aren’t we, Tom?

But certainly an interesting visual.

I have to agree with him here, in a way. When it comes to public bathrooms, I feel likeinconsiderate evacuation of one’s bladder doesn’t discriminate between the sexes.

WIPE IT UP, PEOPLE.

I’m not really sure how aesthetically pleasing a urinal would be in a bathroom, especially when he mentioned it would be easy to sit down, but what do I know?

If I sprinkle when I tinkle, I try to be neat and wipe the seat.

The life of an entrepreneur can certainly be hectic. For many, it’s all work no play, but even those with the smallest amount of free time should enjoy a little bit of downtime. Even if it’s a spare five minutes on a train from A to B, or in between Zoom calls, it’s important to […]

1. Chuck and Blair’s entire relationship. Actually, it’s also about the endless chances Chuck Bass got from Queen B. 2. They had a black-tie gala, masked ball, or fancy charity gala every single weekend. Unbelievable. 3 When Blair didn’t know Louis was royalty. Yeah, right. How?! 4. They were served alcohol even before they were at a legal age. Plus, Chuck Bass owns a […]

27 Times "The Simpsons" Was Too Clever for Its Own Good