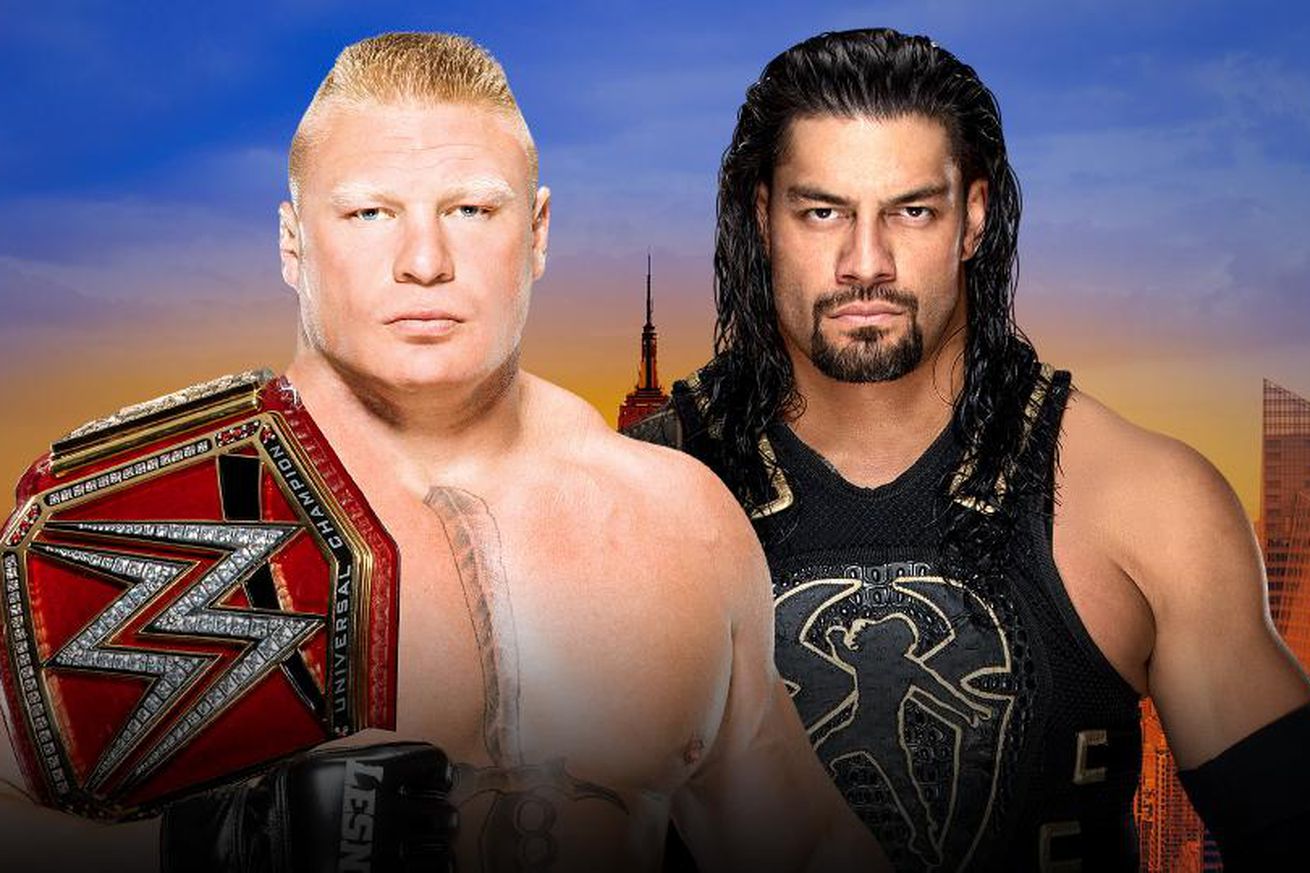 It’s time for one of WWE’s biggest shows of the year, and we’re covering it all live.

Are you ready for (at least) four hours of wrestling? It doesn’t matter if you are, they’re here, as it’s time for the 2018 edition of WWE’s SummerSlam. We’ve got 10 matches (and an Elias concert) lined up, and if we’re lucky, maybe an 11th match, too. If we’re real lucky.

Will Braun Strowman retain his Money in the Bank briefcase against Kevin Owens? Will Brock Lesnar beat Roman Reigns for the WWE Universal Championship again? Will Ronda Rousey get her revenge on Alexa Bliss? Will Daniel Bryan vs. the Miz, a match two years in the making, deliver as hoped? Will WWE stop making me mad and have Becky Lynch win an important match on a pay-per-view? We’ll get our answers to all of these questions and more starting at 7 p.m. ET on the WWE Network.

We’ll be liveblogging the whole thing from start to finish, so stick around if you aren’t watching SummerSlam, or if you are watching it. There are no rules about this sort of thing.

The New Day vs. the Bludgeon Brothers for the SmackDown Tag Team Championships

It’s pancakes time! New Day is here, and it’ll be two of their members taking on Luke Harper and Erick Rowan, who have shown up to the ring wearing masks with giant horns on them. Did they kill the animals whose skulls they are wearing with their hammers? Probably not, because they never use the hammers for anything cool.

It’ll be Xavier Woods and Big E for New Day here, with Kofi on the sidelines watching and cheering them on. Woods stays in for quite some time — too much time for his health, really — but finally gets a tag in to his partner Big E, and E starts laying down punishment on the Bludgeon Bros. With Harper and Rowan both being big, punishing dudes, it’s going to take a whole lot of Big E muscle for New Day to win.

Woods saves the match after Harper and Rowan perform a tag team move on Big E and look for a pin! Woods jumped in at the last second, but now he’s taking all the damage: Harper handed him to Rowan to hold in place so Harper could headbutt him repeatedly. It’s not enough for the pin, though!

Harper now has Big E out on the apron, but it’s unclear what he’s going to do. Big E escapes, and slams Harper to the outside of the ring, right into Woods. Whoops. On the bright side, Woods is now atop the turnbuckle and Harper had to roll out of the ring, so he’s doing okay.

Woods turned that into an elbow from the turnbuckle nearly to the other turnbuckle, to the outside, to elbow drop Harper outside the ring. Jesus, dude, that ruled.

Ugh, Erick Rowan started using the hammer, and that’s a disqualification. The Bludgeon Brothers retain the championships even if New Day picks up the W. This is a new development, though, as the Bludgeon Brothers have rolled through everyone with little effort, and now they had to cheat in order to win. New Day will get another shot in time, and they might pick up the W and the titles that time.

Seth Rollins vs. Dolph Ziggler for the Intercontinental Championship

Remember Extreme Rules and the Iron Man Match for the Intercontinental Championship that resulted in Dolph Ziggler retaining against Seth Rollins? That happened because Drew McIntyre was there to destroy Rollins whenever his buddy needed the assist. Now, Dean Ambrose is in Rollins’ corner to help counter McIntyre, and if you’re stillwondering just how important it is that McIntyre is countered, just know he came out after Ziggler, and his music played longer, and they walked to the ring to it together.

Ziggler’s tights have the Intercontinental Championship printed on them, which is the most I’ve liked Dolph in years.

Seth’s grin at Dean immediately confronting Drew is everything. pic.twitter.com/9qFyE32WHQ

McIntyre already tried to insert himself into the match early on, but Dean Ambrose reminded him that he exists, which got Drew to change his mind about putting his hands on Rollins. Expect a lot of that!

This is your reminder that Dean Ambrose is a lot bigger than you remembered: yeah, he’s super swole now, but just in terms of height — Drew McIntyre isn’t towering over him when they stare each other down.

I’m into Rollins Thanos-inspired wrestling gear. Here’s hoping Ziggler doesn’t feel so good by the end of this match.

Rollins has taken a few big bumps to the outside already, but he’s also recovered and is kicking Dolph Ziggler in the face when able. The pace is picking up, which is good — this has been fine, but as a match pretty late into this feud, seeing them go harder is preferred.

Oh shit! Ziggler did his huge DDT on the apron, and planted Rollins brain-first into the apron [yells from the back, “That’s the hardest part of the ring!”]. What a great visual:

Seth Rollins rules, man. A reverse superplex, rolled into another slam, but only gets a two count. McIntyre attacked Ambrose on the outside, distracting Rollins, and Ziggler threw Rollins into the ringpost and then Zig Zagged him.

Seth kicks out! But he’s also bleeding from his head now. He’s not bleeding so much that he couldn’t avoid a superkick from Ziggler, though, and now we’re in a pinning sequence… that’s going to end with a buckle bomb from Rollins!

Ambrose recovers, pulls McIntyre off of the apron, and hits him with a Dirty Deeds. Rollins counters Ziggler’s superkick attempt with his own superkick — having longer legs is an advantage there — and goes for the pin. 1, 2, 3, and Seth Rollins is the Intercontinental Champion again!

Managing editor Keely Reichardt approached tattoo artist, Fidjit over Instagram in July 2015 after spotting an ambiguous statement posted late at night.  Fidjit chose to remove the post not long after it had gone live, but Keely decided to reach out to her, to find out about the life-changing event she had hinted at… The […]

Most couples in long-term relationships end up sleeping together in the same bed—but that can be a problem for one or both lovers. Sleep is an important component of your health, and if one person makes it harder or impossible for the other to get a good night’s sleep, the other partner will suffer the […]

5 important things for women to maintain their intimate health.

Why is a women’s intimate health such a taboo? In most cases, most struggle to maintain it because they aren’t even aware of what is required of them. The simple dos and don’ts. Young girls aren’t educated enough on the subject. Private parts aren’t even addressed unless you have biology as subject or awkward lectures […]