Design firm Studio 512 has created a whimsical guest dwelling for a Texas home that features angled walls clad in oversized shingles, and interior spaces that narrow and widen based on how they are used. 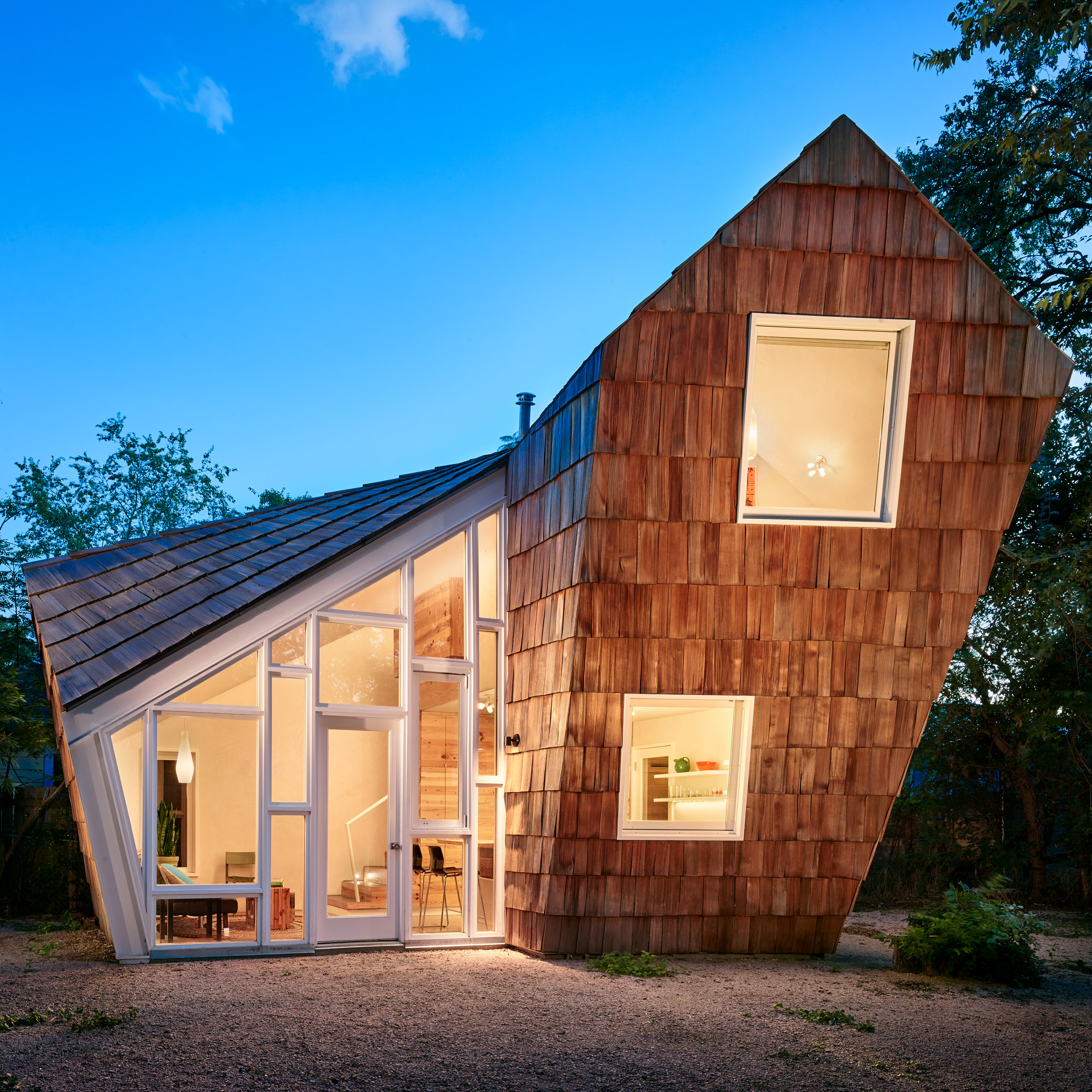 Created for a television and documentary film producer, The Hive sits behind a bungalow-style main residence in Austin. Encompassing 550 square feet (51 square metres), the two-storey guest dwelling contains a kitchen and living room at ground level, and a bedroom and office up above. The sculptural building was designed and built by Studio 512, a local practice led by architect Nicole Blair. 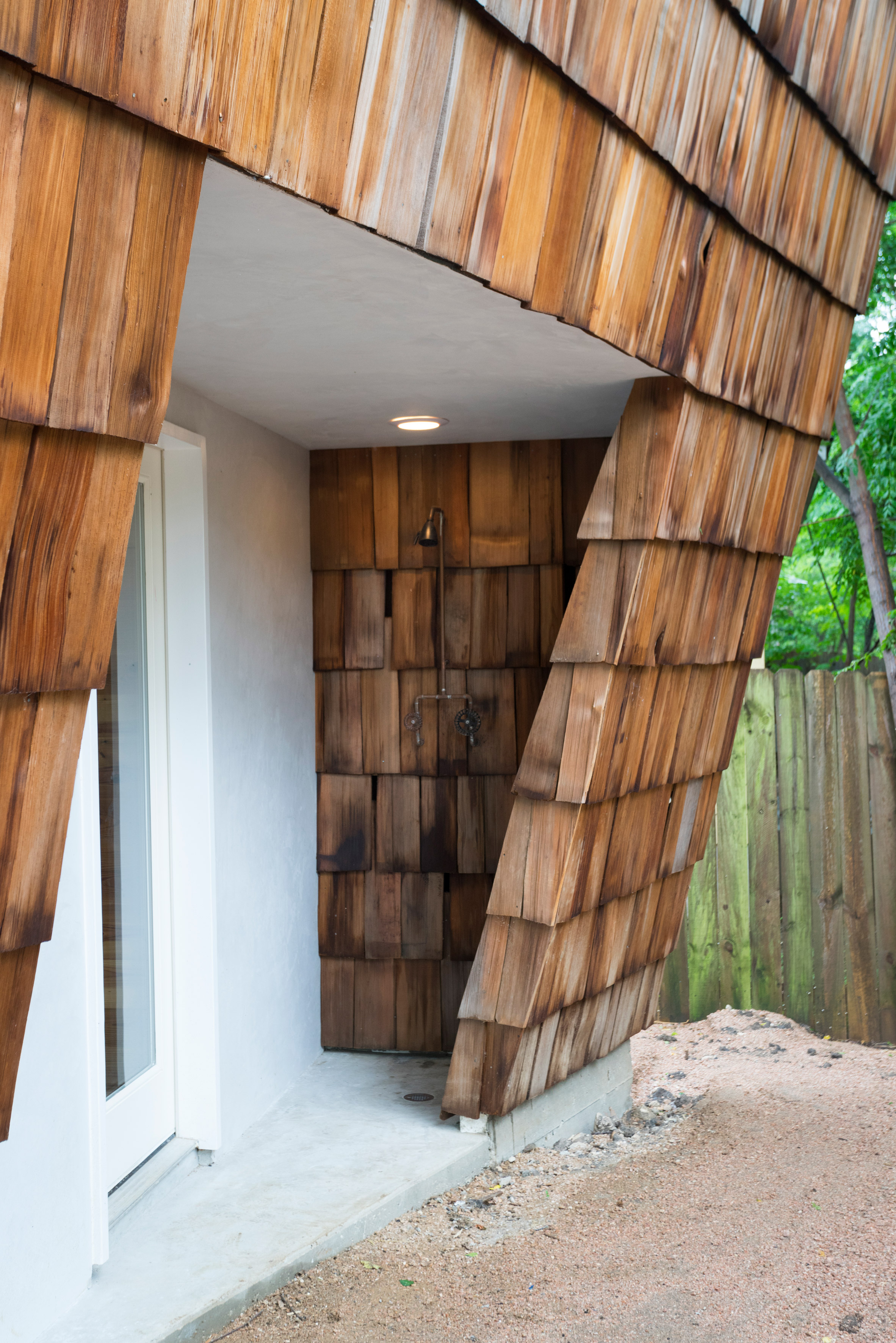 The building’s irregular shape is an intriguing response to local rules. The city requires that the footprint of a guest house on a residential property be no larger than 320 square feet (30 square metres). In order to create a bigger dwelling, Blair added a floor and incorporated walls that slant outward. 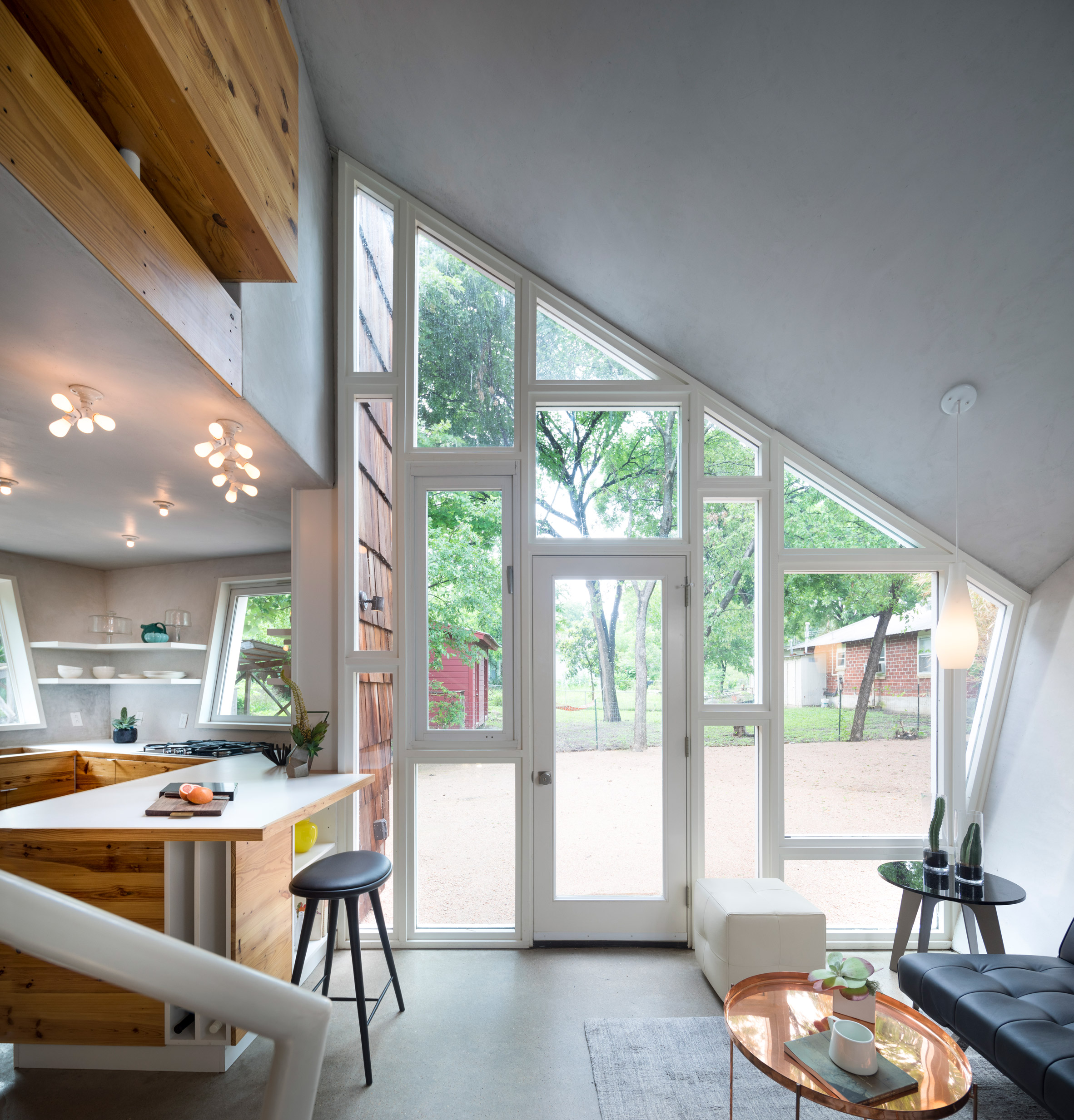 “Walls tilt from the slab, hugging building setback planes and an angled utility easement at the back of the property, to add volume where needed — evoking the shape of a beehive,” the designer said.

Exterior walls are clad in large cedar shakes that were fabricated using old roofing material. Various-sized windows are framed in white and bring daylight into the compact guest home. 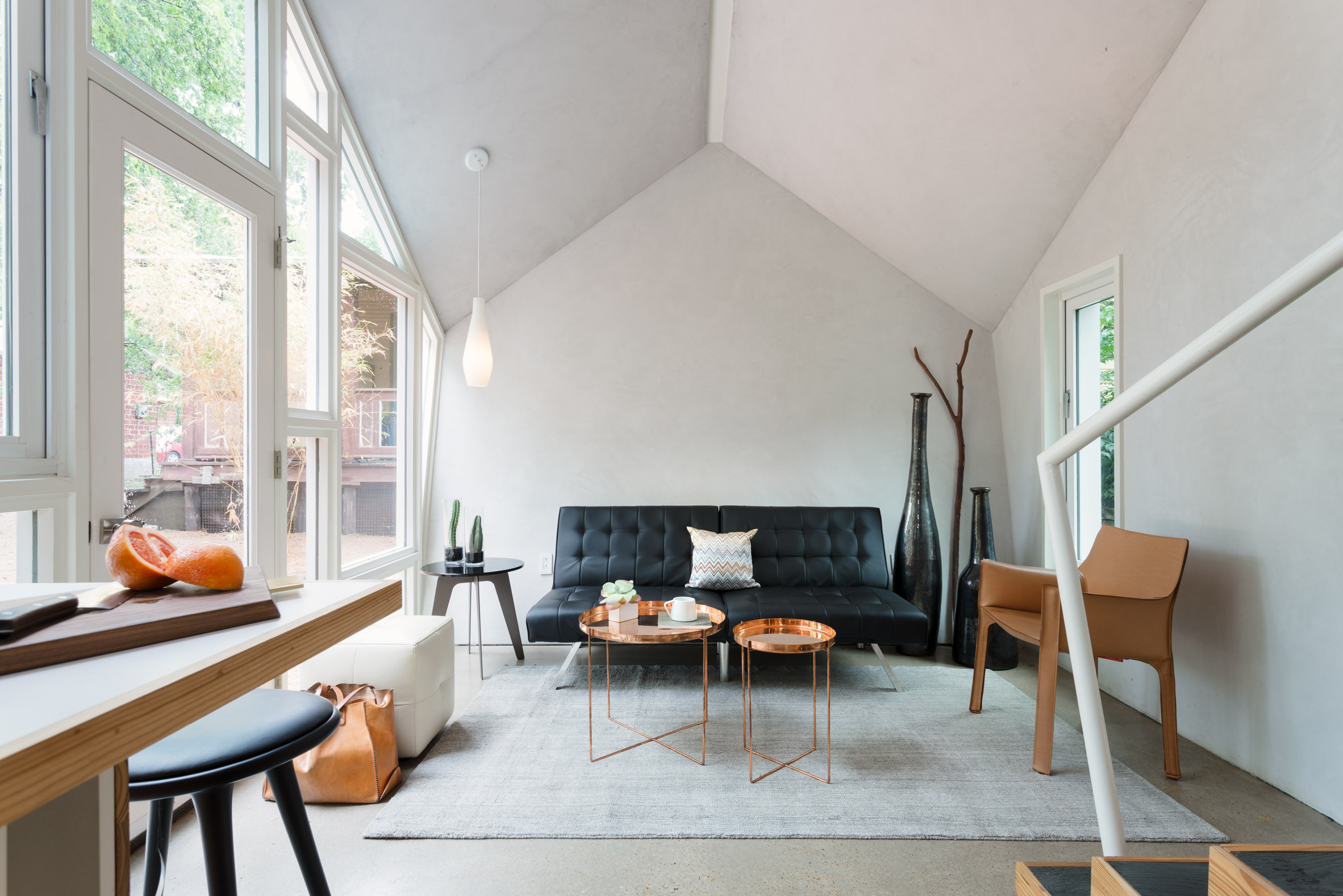 Inside the dwelling, rooms widen and narrow, based on how the space is used. According to Blair, this strategy was informed by the principles represented in the Vitruvian Man, the famous 15th-century drawing by Leonardo da Vinci. The image, which depicts ideal proportions, drew upon the work of the ancient Roman architect Vitruvius. 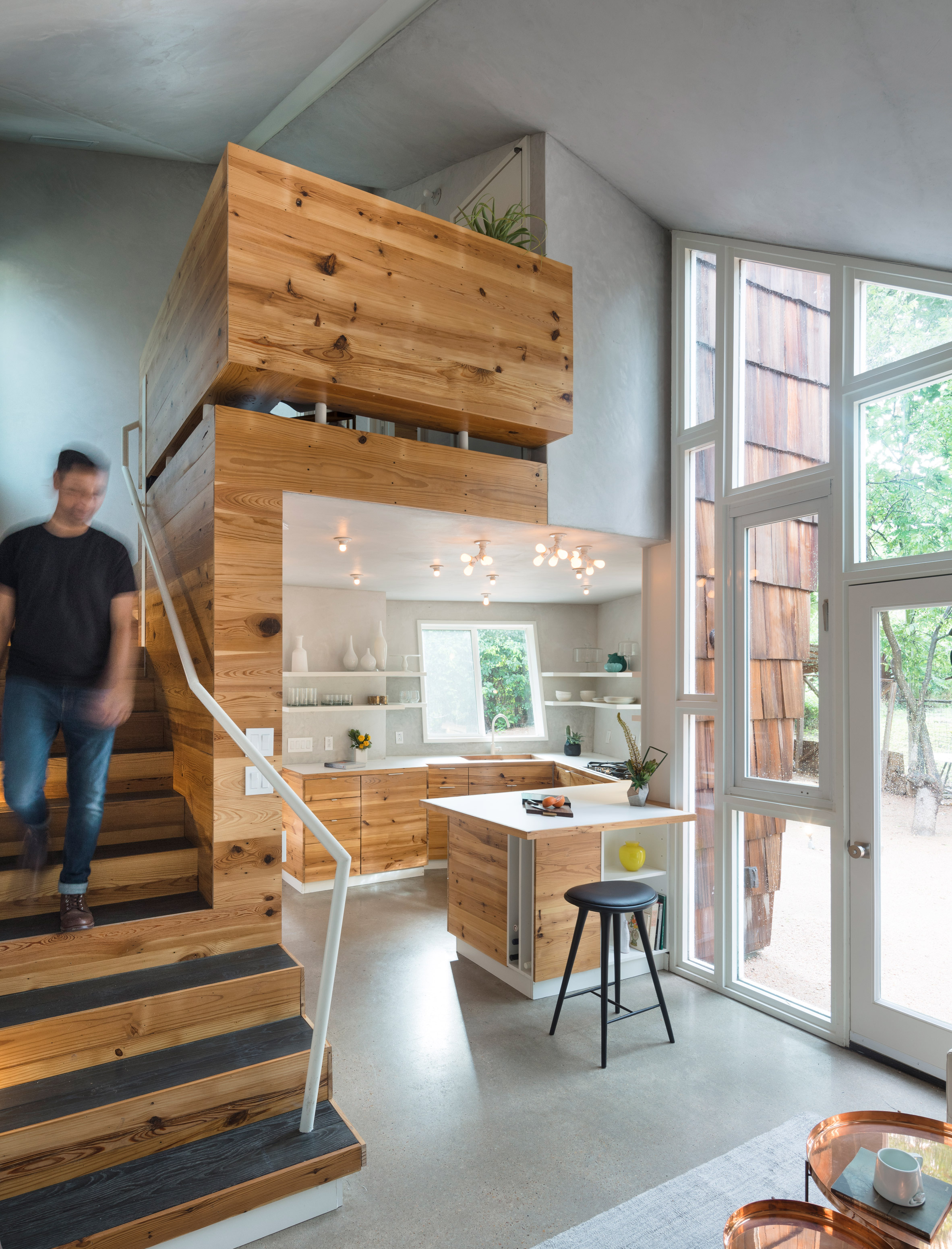 In da Vinci’s drawing, a male figure is shown standing in two different poses, and a range of motion is suggested by a circle that surrounds the man. To conceive the guest home’s spatial dimensions, Blair took cues from the drawing, while also considering how rooms would be used.

“His range of motion is circular, the widest at shoulder height, the narrowest at the ceiling and floor,” said Blair of the Vitruvian Man. “This observation, coupled with close examination of the actions performed in each space – sitting, sleeping, standing – inform the shape of The Hive to yield a dynamic, structured environment for living that feels both intimate and grand.” 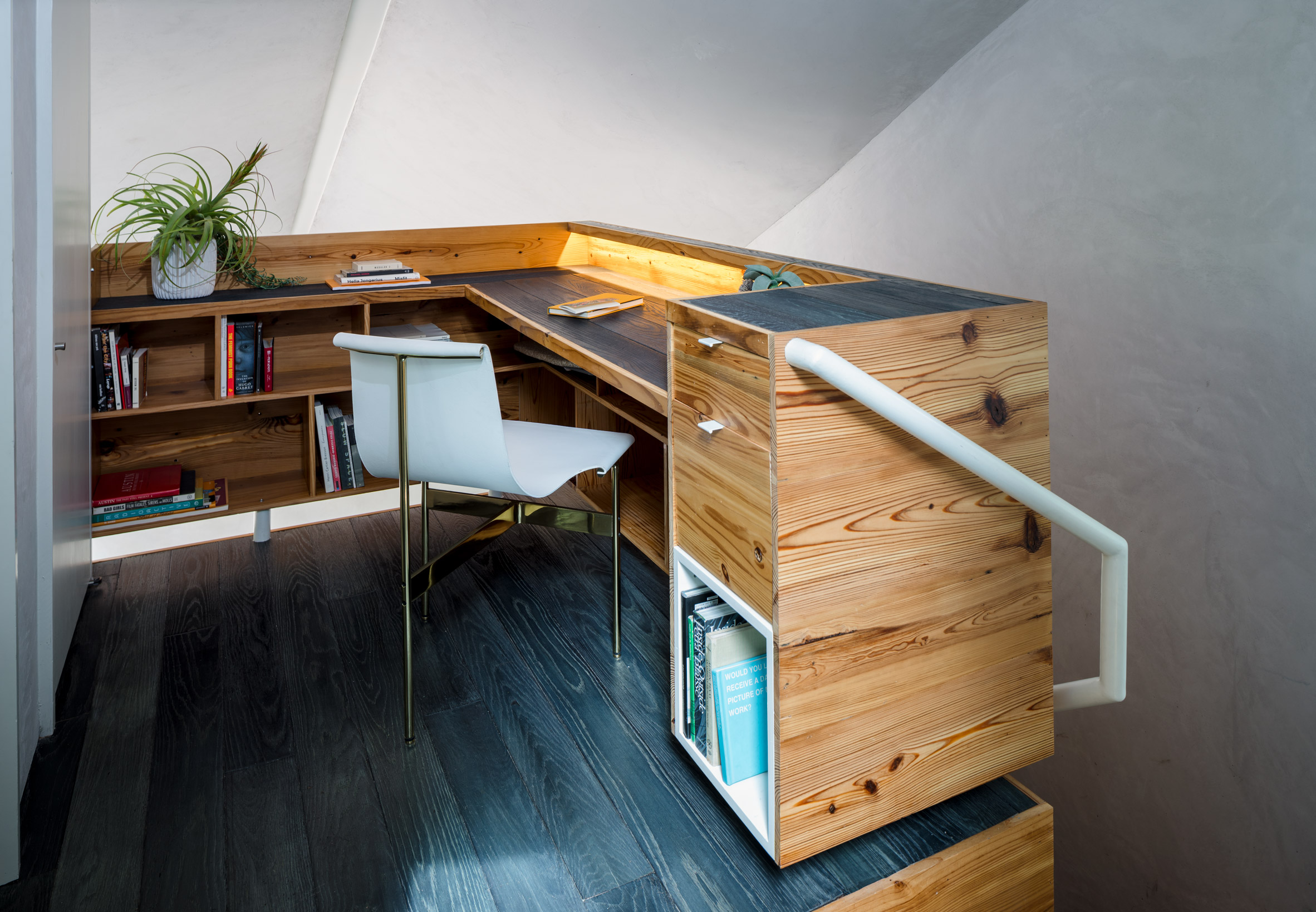 In the kitchen, the walls lean outward to allow for more counter space. In the bedroom, the room widens at knee-height, which permitted the insertion of a queen-sized mattress. Spatial manipulations are even present in the bathroom. 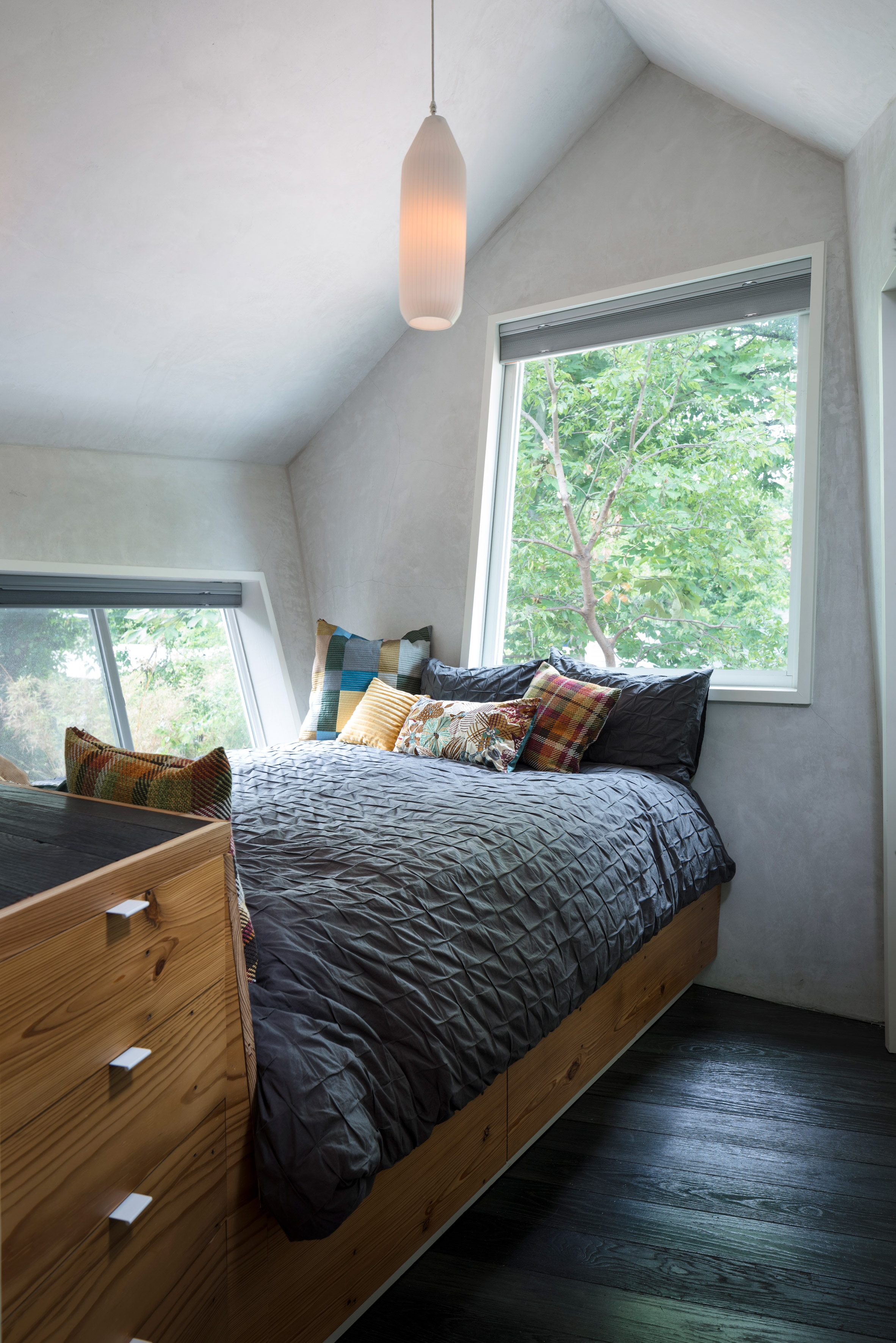 “The shower is widest towards the centre of the body up to the head, and a tall, narrow ceiling provides room for rising steam,” the designer said. “By carefully tailoring the space in three dimensions, rooms are cut down and expanded to suit the programme.” 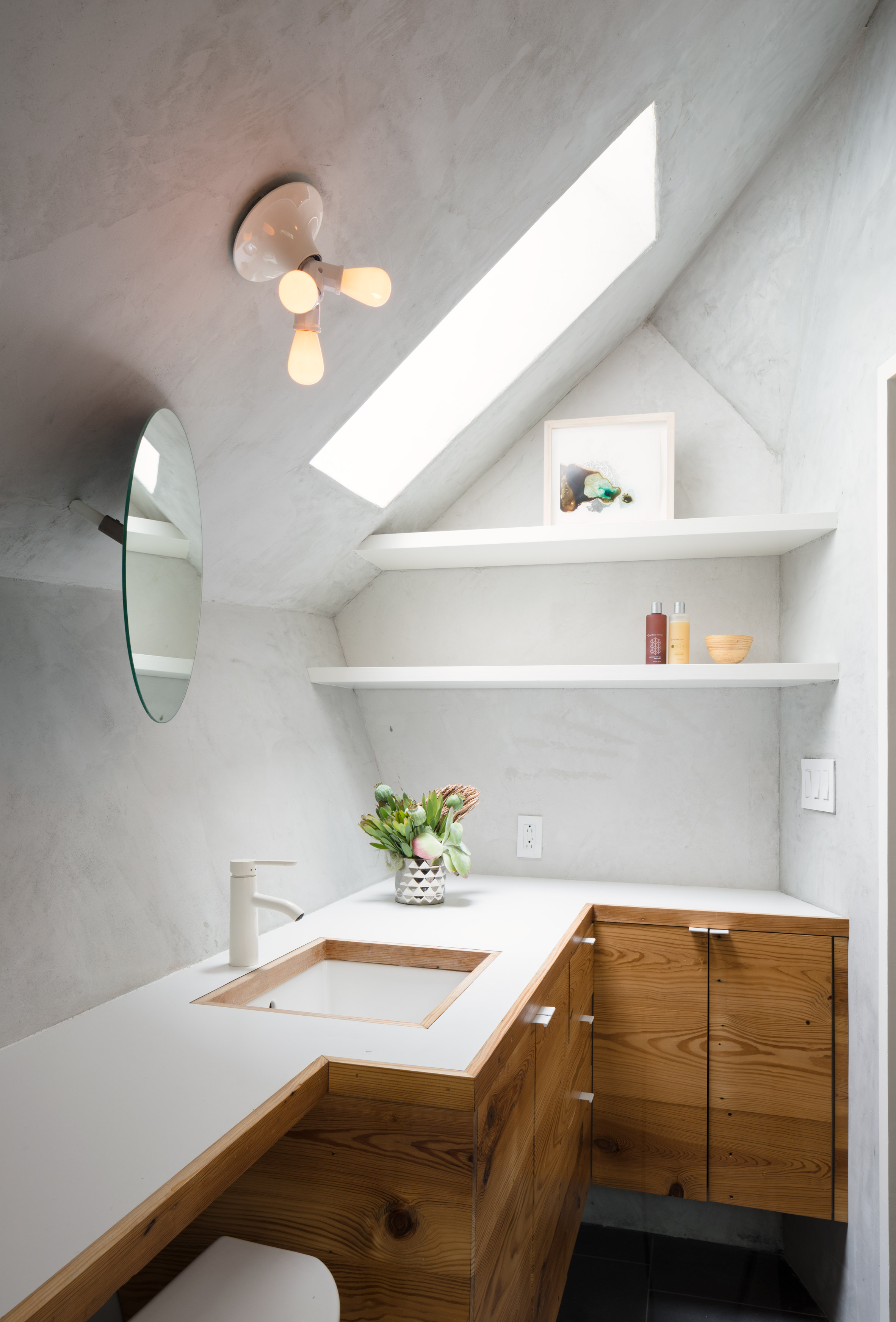 The home has an eclectic mix of finishes, including stucco walls, concrete and blackened wooden flooring, and cabinetry fronts made of reclaimed longleaf pine. There are a number of bespoke features, such as exposed copper pipes in the bathroom and an outdoor shower in the home’s covered entryway. 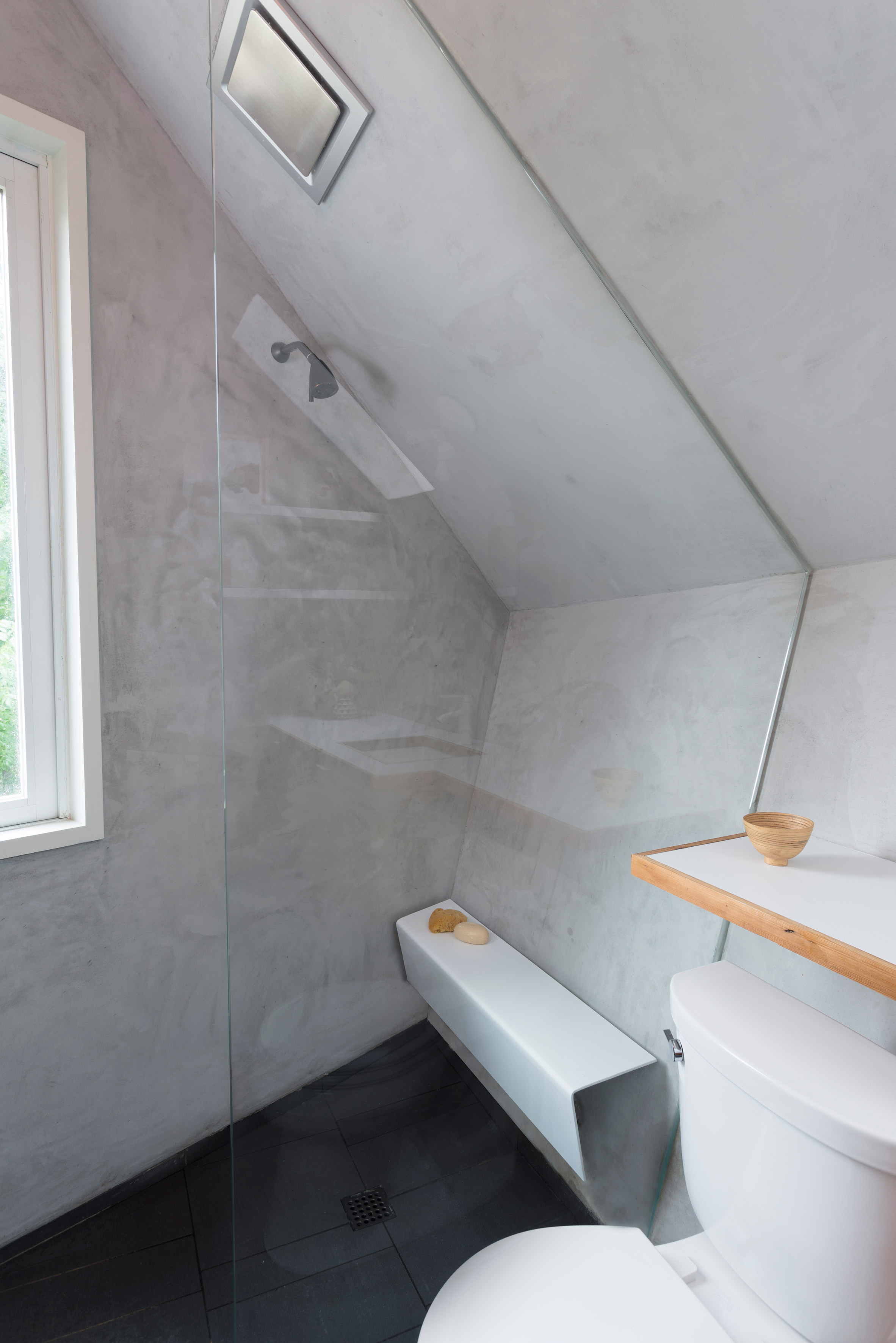 Blair noted that boxy forms prevail in architecture due to “economy of construction, reproduction and reuse”. But these forms can result in inefficiencies.

“Inefficiencies can emerge when examining other factors like material excess (purchasing and installing more materials on a cost-per-square-foot basis than needed), energy consumption (to heat and cool more volume than needed), and oversizing (occupying real estate that may otherwise be shared by another function),” said the designer. 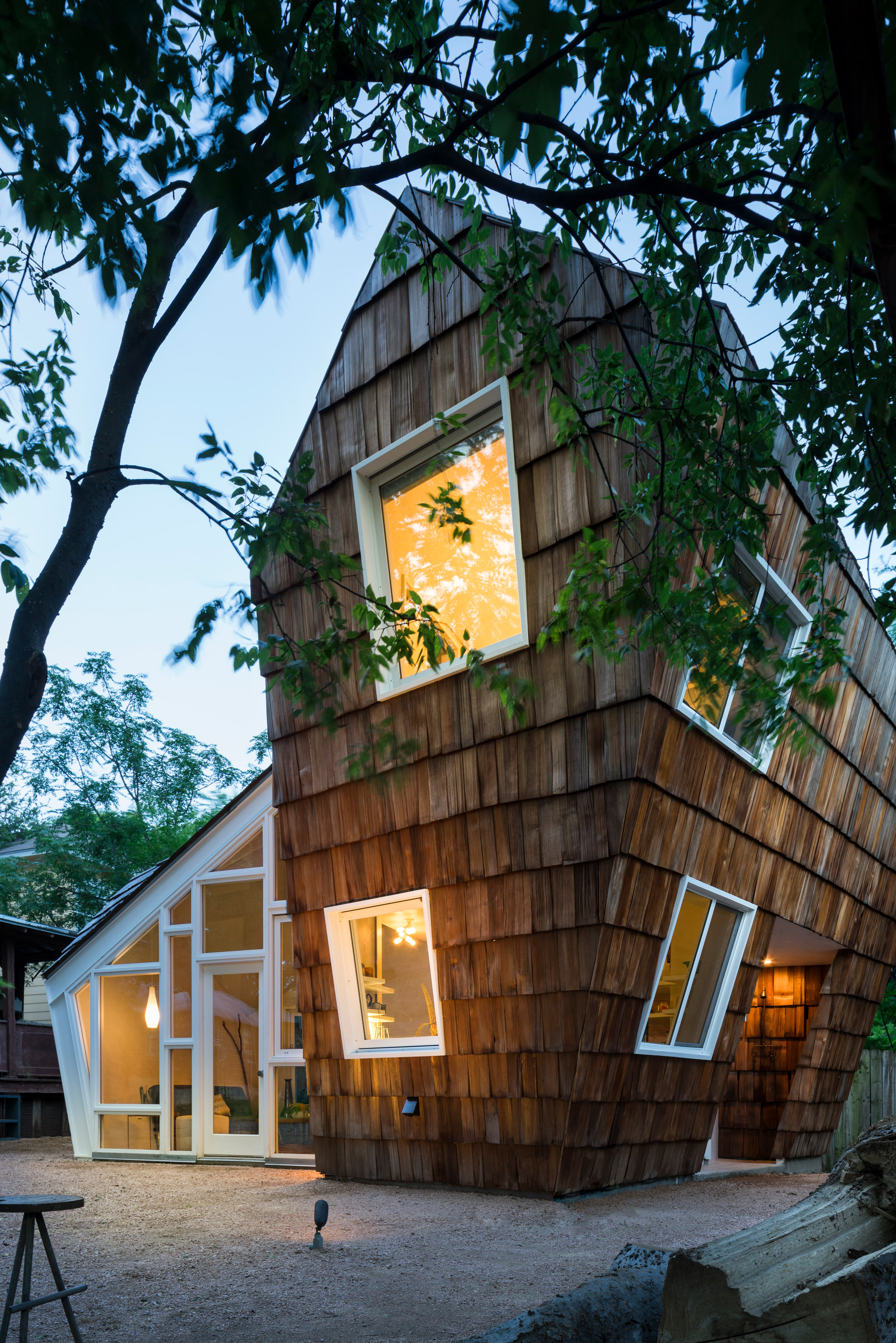 “Like a well-designed garment, a building may perform best when tailored to the shape and movement of its inhabitants.”

An Austin native, Blair studied textiles and apparel at Cornell University and went on to earn an architecture master’s degree from Rice University. She worked at the New York offices of Peter Eisenman and Robert AM Stern before starting her own practice in 2004.

Photography is by Whit Preston unless stated otherwise.

How to Get Help to Buy Mortgage with Bad Credit

SoftBank is considering taking a majority stake in WeWork

SoftBank may soon own up to 50 percent of WeWork, a well-funded provider of co-working spaces headquartered in New York, according to a new report from The Wall Street Journal. SoftBank is reportedly weighing an investment between $15 billion and $20 billion, which would come from its $92 billion Vision Fund, a super-sized venture fund […]

Total Budget: 250-270k Land Budget: 40-50k Construction Budget: 200-220k ​ Currently have 55k saved for a down payment while adding about 2k/mo to that going forward. ​ My wife and I are looking at land to purchase while researching home plans/builders. We have not met with a mortgage broker as of yet. We found a […]