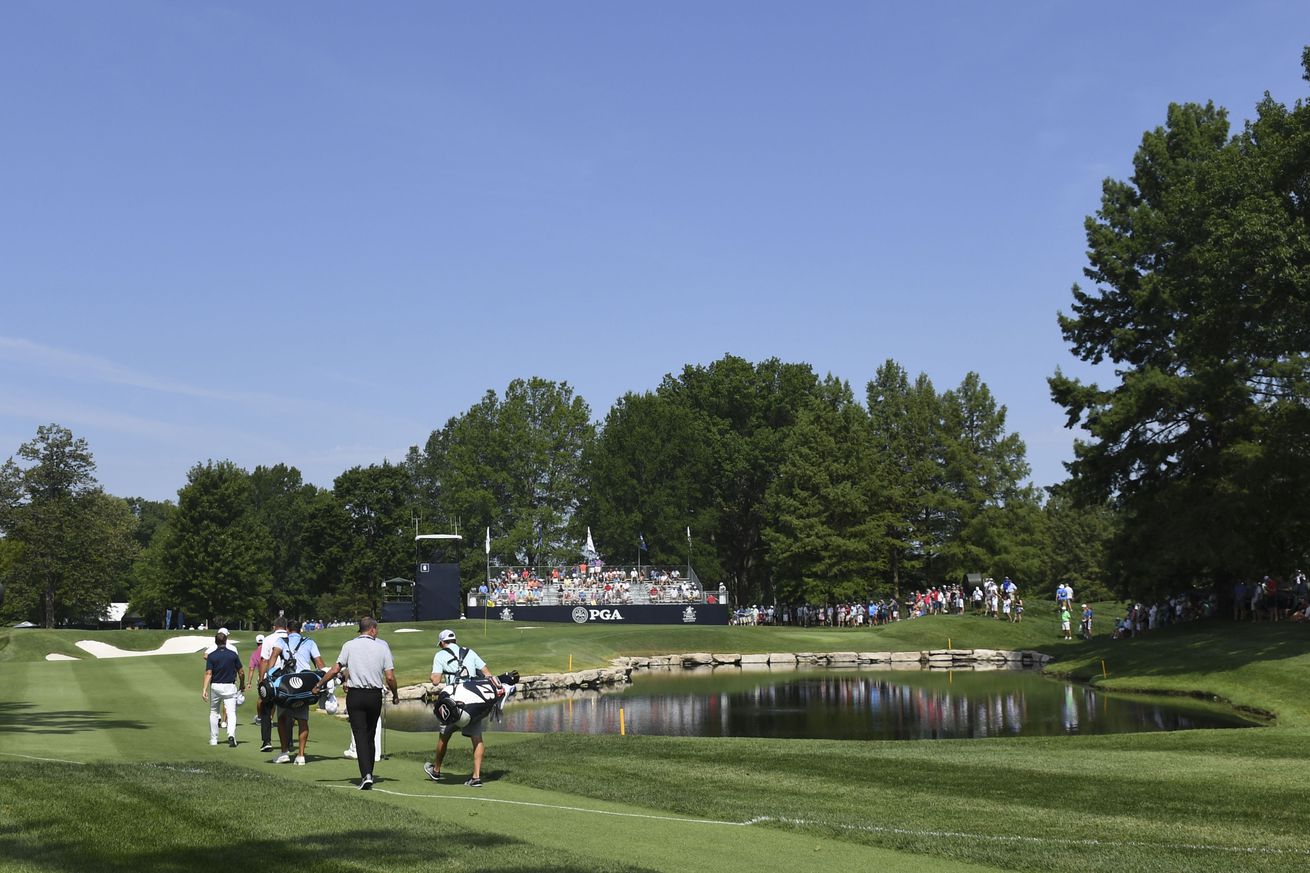 Bellerive is wet, soggy, burnt-out, pedestrian, and designed by Robert Trent Jones. None of that will preclude a fun, awesome major championship in St. Louis — a city off golf’s beaten path.

At some point, week-in, week-out golf fans got obsessed with grass. If that sounds patronizing, it’s not intended as such. There’s more available content on golf course design, agronomy, routing, redans, width, whatever it may be — than ever before.

With that in mind, let’s get it out of the way: Bellerive may stink. When the 100th PGA Championship gets started Thursday in St. Louis, there’s plenty of evidence to state with some sort of reasonable certainty that the golf course won’t quite live up to typical major championship standards, whatever those arbitrary marks may be.

Start with the obvious. Bellerive, on the banks of a creek in a town built almost entirely on Mississippi River wetlands, has been pelted with rain for almost all of Monday and Tuesday. Add to that a chance of storms over the weekend, and we’ve got fantastic ingredients for a wet, soggy, slow slog through a 7,300-plus yard track.

The concerns don’t stop there. St. Louis summers tend to be a uniquely brutal circle of hell, and this past one’s been on record level. Thanks to long stretches of 90-plus temperatures in June and July, following a nonexistent Spring, we’ll see greens at a major championships with patches of barren burnout around the edges. These images were taken pre-rain and, hoo boy, it makes a PGA Championship venue look more like your local muni track. It is, no doubt, less than ideal.

There were rumors that Bellerive’s greens were burnt out this summer. It appears those rumors were true. That said, not in an unplayable state, mostly just fuzzy around the edges #PGAChampionship pic.twitter.com/NVZNtvlv1o

Conditioning is just the start of the complaints about Bellerive from some, too. Architecture types will tell you it’s a lengthy, classic parkland course — a stock American style course from the dark ages of design that emphasizes only big, straight drives and at-the-pin, in-the-air approaches with irons. It was built by Robert Trent Jones in 1960 as a penal test, and updated by his progeny, Rees Jones in 2006. It’s tree-lined. Greens are flat, and the complexes don’t leave much to the imagination. If Firestone South is the favorite annual punching bag of modern golf architecture appreciators, Bellerive will also make a fine stand-in.

So pick your complaint, the vein you can poke if we end up with a Thorbjorn Oleson-Aaron Wise battle down the stretch on Sunday. The course is bad, the set-up doesn’t bring out the best in players, the wet conditions and slow greens eliminated certain players from contention well before the tournament started. This locale can’t host a major in August. Each of those points may be true, and each may favor or disfavor a certain subset of players in the field. The burnout spots might come into play in a critical moment on Sunday afternoon. It’s all possible. 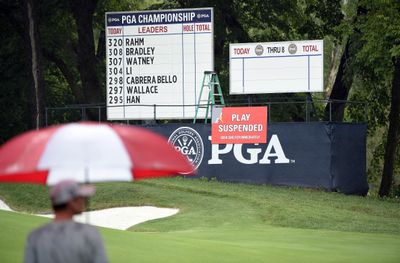 But none of those, either individually or altogether, would alone rob this particular PGA Championship from being chalked up as successful at the end of Sunday. Because major championships, as much as some might like to argue, aren’t defined, never have been defined, nor ever will be defined, by grass or the pattern such grass is arranged in.

Major championships are defined by the players, the drama, the storylines — and the atmosphere around them. Not golf courses.

There’s nothing at all wrong with hosting a major championship at a venue that features more appreciated design trends, but course conditioning & routing shouldn’t be the top considerations when selecting a location. The U.S. Open and PGA are golf’s best opportunity to allow unique audiences to experience top-level golf, and the more mobility and unique markets brought into play, the better. Professional golf events tend to cluster in Florida, California, and Texas — while the northeast tends to be good for at least one major per year. Majors can have the biggest impact in professional golf deserts like St. Louis, where the city’s seen top level professional golf exactly once — the 2008 BMW Championship — in the last 25 years. (The WGC-American Express Championship was slated for Bellerive in 2001, but was cancelled because of the 9/11 attacks on the preceding Tuesday.)

Taking trips off golf’s beaten path sometimes leads to courses that don’t please every agronomist or architect on Twitter, and that’s completely fine. We’ve had plenty of majors that deliver in a big way on tracks that aren’t widely praised for their layout. Consider the 2014 PGA at Vallhalla in Louisville, played on a soggy, water-logged, lengthy, new-age PGA-specific course in high-90s heat and suffocating humidity. Leaders teed off late, around 4:50 p.m., on that Sunday due to rain delays. What followed was perhaps the best, wildest, most absurd major championship finish of the decade, with Rory McIlroy finishing off Rickie Fowler and Phil Mickelson on the 18th in the dark for his most recent major win. Oh, and yeah, the PGA was happy as well. Louisville set single-day and full-week attendance records that week, layout be damned.

You can continue down the list of tracks that aren’t the favorite of architecture heads that have delivered brilliant major finishes. Torrey Pines, another Rees Jones redesign always roasted as a boring set-up, gave us the best major finish of the last quarter-century in 2008. Medinah has delivered before, Whistling Straits on multiple occasions. None have precluded any event from becoming an overall success. Each of those locations — San Diego, Chicago, Wisconsin — tend to deliver huge crowds, too.

Perhaps that’s where the golf community can lose the forest through the trees too often when it comes to the relative success or failure of a major championship. For those of us that follow the tour week-in and week-out, we focus on how much players complain about conditioning, or the architecture reviews, or how quickly the media shuttles can move from hotel to golf course. All, or perhaps just the first two, are legitimate complaints in some way, shape, or form. Ideally, every PGA Championship would take place on a classic architectural gem with perfect conditioning.

But that’s also not reality, nor is it the aim of the PGA in particular. If you’re part of the 30% of this weekend’s viewer base that tunes into the Tour week-to-week, major championships are not for you. Majors are designed for maximum exposure. They are the front porch to the game of golf where new audiences can be exposed for a sport that often looks far too homogenous. Club professionals, by job description, are very literally the individuals tasked with growing the sport on a day-to-day basis in America. There’s nothing more core to the PGA’s mission than taking its flagship event to markets others won’t seem to go and if the trade-off is that golf’s core week-to-week fans are a bit rankled about the layout and conditioning, well, so be it.

It’s good and nothing but good that St. Louis — a uniquely fun, interesting city and strong sports market — gets a major championship. We’ll get Tiger Woods, playing in a city where he’s never teed it up for a tournament round. We’ll have massive crowds. We’ll have nothing that will automatically preclude us from a memorable major championship, Robert Trent Jones, green health, and rain be damned.

The FFA has made one of its priorities this season to sign big marquee players in order to attract bigger crowds. Today I take a look at six free agents your A-League club should sign. Claudio Yacob The former West Bromwich Albion man recently left the Baggies after their relegation from the EPL. The Argentinian […]

The 2019 Honda Civic Sedan and Coupe just touched down in America with a few mid-cycle updates. Visually, the compact models stand out from their restyled front bumper and apron, upper and lower grilles, and halogen and LED headlights. At the rear end, the four-door version gets a chrome accent on the lower part of […]