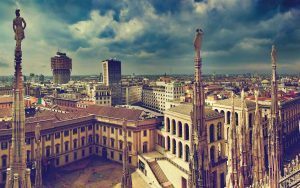 Italy’s retail betting sector generated revenue of €490.6 million during the first seven months of the year, a period that included the FIFA World Cup, Italian gambling news outlet Agimeg reports. The amount of €2.5 billion was wagered at betting shops across the country during the reviewed period.

Naples was the province to top the revenue chart. The amount of €71.4 million was generated in revenue during the seven months ended July 31. Bettors wagered a total of €448 million during the reported period. There are around 1,263 retail betting points across the province.

In Rome and the surrounding area, the amount of €39.2 million was generated in revenue, with betting turnover totaling €223.5 million. There are 804 active betting agencies in the region, according to information from Agimeg. Milan rounded out the podium during the first seven months of the year with total bets of €139.6 million and revenue of €26.3 million.

Italy’s overall sports betting revenue totaled €852 million during the seven months ended July 31, Agimeg reports. The above figure represented a 43.3% increase from the same period of 2017. The rise was, to an extent, due to the month-long FIFA World Cup. The major football championship took place from June 14 to July 15 and saw record betting volumes around the world. The government collected the total amount of €168 million in taxes from sports betting revenue during the first seven months of the year. That figure is expected to drop significantly once the recently approved ban on all forms of gambling advertising takes effect.

The so-called Dignity Decree, introduced by Deputy Prime Minister Luigi Di Maio in May, quickly gained foothold to eventually pass the Italian legislature. Among other provisions, the legislative piece contained a proposal for a blanket ban on all forms of gambling advertising across all channels, including print, radio, television, and the Internet. The scope of the ban is unprecedented in Europe and Minister Di Maio has advised other jurisdictions to follow suit. The new regime is set to come into force on January 1, 2019.

While it is difficult to determine how hard the industry will be hit by the upcoming implementation of the ban, it is quite clear that there will be severe consequences for licensed operators, who have argued, following the recent passage of the Dignity Decree, that the move would kill their only advantage over black market operations.

Reports have emerged that Irish bookmaker Paddy Power Betfair was considering its exit from the Italian market after years of struggling to gain a larger share. It should be expected that more licensed operators would reconsider their presence in Italy’s gambling market once the ban takes full effect early next year.

The lawn wants cutting, but … there is coffee. Today I love Saturday chores that put me in mind of being a youngster and a teenager. I love that I’ve been so busy these last four weeks and that now the things I have to do today are more like those good old Saturday morning […]

A Wonder Woman 1984 fan-created poster pays tribute to The Breakfast Club. As the most successful entry in DC’s cinematic universe to date, it’s no surprise that there are high expectations for Wonder Woman‘s sequel. Story details for the upcoming film are still scant, but the movie will see Diana Prince battle another villain, this time at the height […]

The 6 types of backup NFL quarterbacks in 2018

Every team is the league is one bad play from disaster. So who’s prepared for a doomsday scenario, and who’s screwed? A good quarterback can win you the Super Bowl. A bad one can send you careening to a four-win campaign. For several NFL teams, the difference between the two is one season-altering hit. We’ve […]