Driving back to Tamworth after taking my three sons and their mates from our local junior rugby club to the Bledisloe Cup had me reflecting on what rugby and our rugby community have become.

A sister in law of mine – I have few – once told me that when you give your kids the things you didn’t have as child, be careful, as you might not give them what you did have.

While you think about that one, I will offer the following observations and more importantly some possible solutions.

The glaring issues with rugby at the moment are actually not external, they are all about us, the rugby community and what we have become in the professional era. That’s right, pull up a chair.

The real issues are not our coaches, our players or our administration. I put it to you that it is our lack of connection with the teams, our need for spiritual home, and a need to embrace the complexity and intrigue of our game.

There are three things we used to have that I’m not sure we still do.

Firstly – do we know the team, the folklore, the history? Schools and club rugby have a loyalty, in spades, in good times and bad. They simply know and appreciate their team, it’s history and folklore.

When the team loses the supporters feel their pain, not call them heartless, overpaid, lazy or poorly coached.

Similarly, there is a knowledge of the history, the personalities, the heroes and the villains in the opposing tribe. This could start with a free-to-air presence.

Their original monikers say it all. One is the Sydney Football Stadium and the other is simply the Olympic Stadium.

The solution? If we are to build a new, extravagant ground it must be at Moore Park. ANZ Stadium is the centre of Sydney but all roads lead to the city centre, and that’s where the fans want to go.

We don’t want to truck them in and out like cattle but if we do then we need to make sure it’s is close to a watering hole!

A sacred site would bring out the best in us and our team. Think of the spiritual homes in our game such as Murrayfield, Cardiff Arms Park, the old Carisbrook, Twickenham. Or think SCG, the MCG and Suncorp.

Have we ever spoken about ANZ Stadium in these reverent tones? Make sure the new digs have a decent nickname – the House of Pain or the Cake Tin, the Home of Rugby, the G. 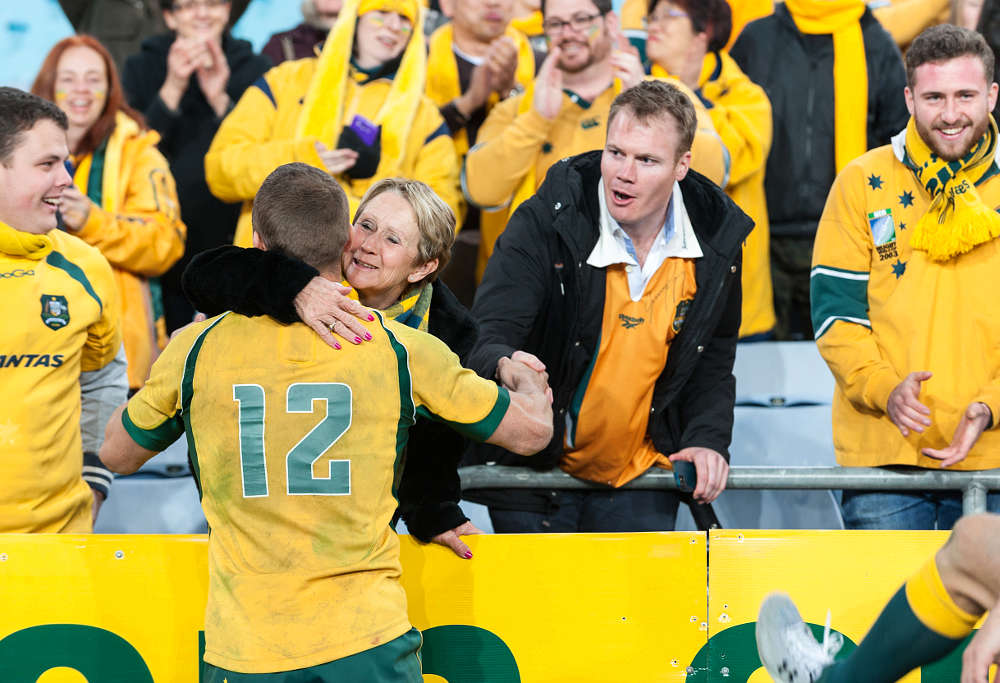 Finally – students of the game. In a game of rugby, we are looking at a masterpiece, a work of art – the game they play in heaven, no less.

Rugby’s strength is its Chess-like complexity. Our commentators and writers sometimes focus on simplifying rugby for a wider audience, but we need to increase the awareness of its many layers.

Rod Kafer and The Roar’s Nicholas Bishop take us into this world, unapologetically and in an informative, intriguing way.

When the All Blacks gave our young blokes a lesson in line outs in Bledisloe I, it was in fact a thing of beauty and intrigue.

In rugby you can walk into a rugby club or pub anywhere in the word and be greeted as family. That is our point of difference.

My boys’ highlight for the Bledisloe? It was post-match, long after the Wallabies has left the field. All Blacks reserves including TJ Perenara remained to do a warm down.

All Blacks fan: “Hey TJ, my main man. Well done bro.” he waves then turns to our 3 boys in their Wallabies gear.

TJ: “It’s all good bro. We’re all playing the same game. In rugby we are all one family, hey boys?”

That comradery is our point of difference as a sport. For my boys that was the highlight.

So, in these times of great innovations like fancy stadiums, spidercam and live pause let’s not forget what made the game great in the first place.

They are talking about this new innovation for the second Bledisloe whereby both teams will share a beer after the game.

If this hasn’t been happening in the professional era, then that, right there, is where we have lost our way.

Wallabies to fix the set piece and give tonight’s Test an almighty shake. You heard it here first.

The 888Live festival is set to return to its home casino at the Aspers Casino in East London and you have just one chance left to qualify for the main event. The festival will run until Oct. 5-16 with 10 events of different games and buy-ins so it’ll be well worth going even for the […]

We’re a virtual company made up of tech experts from across the globe. Our interests also incude video games, and we have some of the best recommendations when it comes to what to play if you don’t have PlayStation Plus. While PlayStation Plus is usually a requirement to play online multiplayer, there are notable exceptions […]

It has been over 17 years since Onimusha: Warlords first appeared on PS2, kicking off a beloved series that spawned sequels and spin-offs full of intense sword fights, duty-bound warriors, and demons determined to envelop the world in darkness. After selling more than two million copies worldwide on PS2, we’re proud to announce Onimusha: Warlords […]