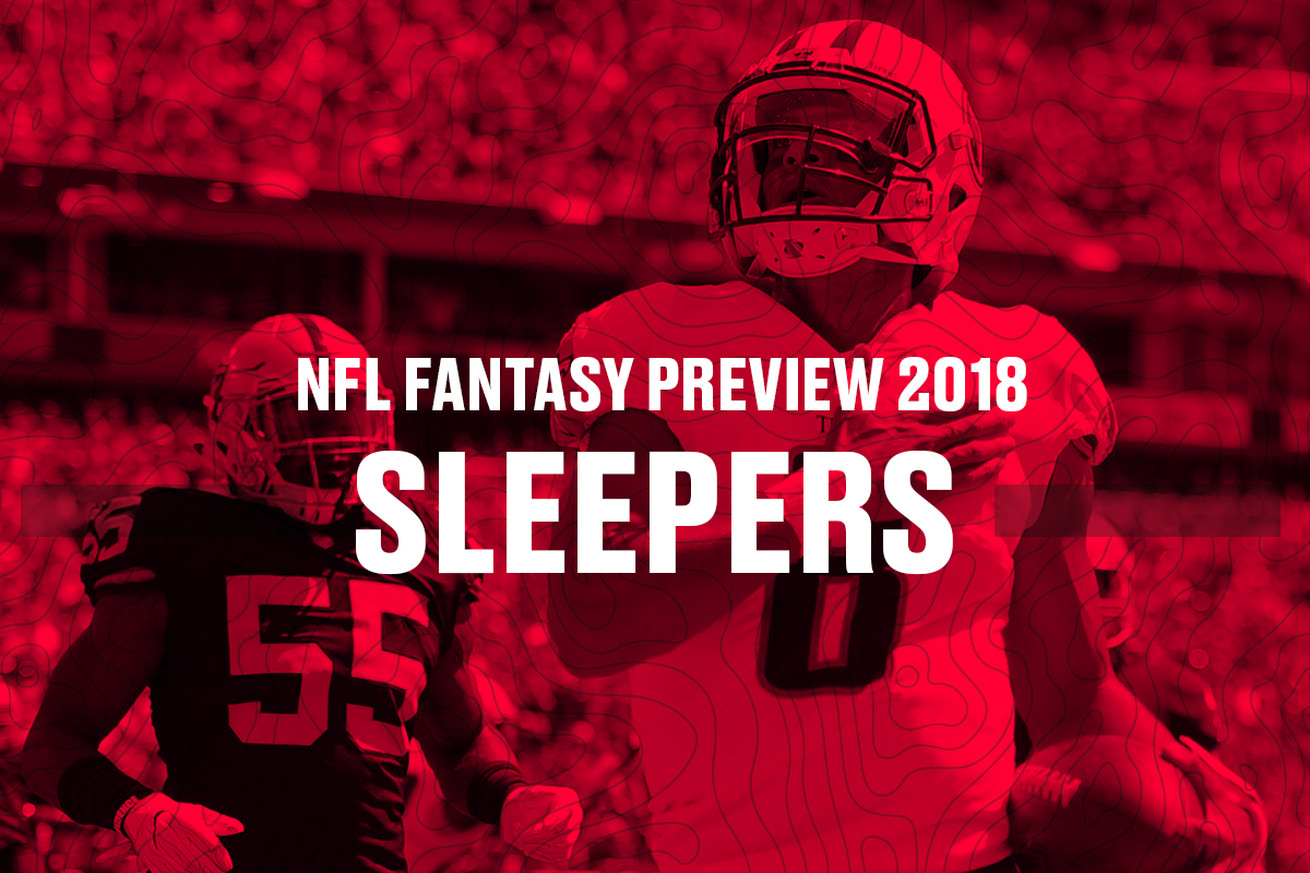 Every season, fantasy football features the usual list of notable names. Todd Gurley, Aaron Rodgers, and Antonio Brown are going to carry you to glory in 2018. If you can land one or more of those big names, you will be in a strong position right out of the gate. However, fantasy football championships are often won or lost in the middle and late rounds of the draft.

”Sleepers” can be an overused word, but every year there are players who surprise us all. A complete unknown bursting out as a waiver wire pick-up is all but a certainty, and there will be mid-round pick-ups that put together first or second round production. We went through the four skill positions to find the best sleepers heading into your 2018 fantasy football draft. 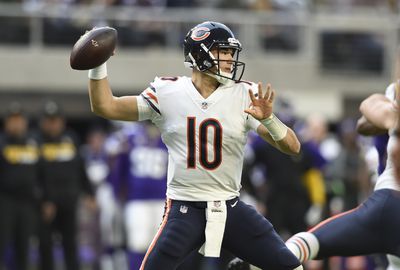 Trubisky floundered early as a rookie, but made positive steps as the season closed. Chicago didn’t ask too much of him and the offense was very conservative. His receiving corps was probably the worst in the NFL with players such as Dontrelle Inman and Josh Bellamy.

The Bears have worked hard to surround Trubisky with more support this offseason. They hired an offensive-minded coach in Mike Nagy, and added new offensive weapons including Allen Robinson, Taylor Gabriel, Trey Burton, and Anthony Miller. Additionally, he still has an excellent stable of backs in Jordan Howard and Tarik Cohen.

Learning a new offense and working with new receivers will present challenges. I like the looks of the schedule he’ll face in 2018 with plenty of room for success. He has the tools to make a decent leap in his second year and could be a steal in the later rounds. 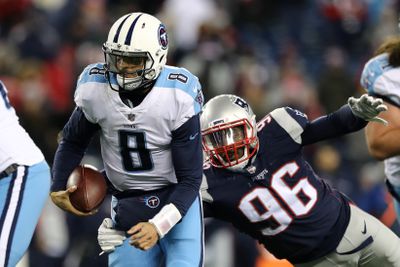 Mariota has shown flashes of ability in his first three seasons. The offense though has really held him back from unleashing all of his potential. The Titans haven’t been able to escape the bottom ten in passing yards over the last three seasons. The slow, methodical pace restricted any chance of big chunk plays and fantasy relevance.

The Titans cleaned out their coaching staff and hired a head coach and offensive coordinator from pass-first schemes. Tennessee only made a couple changes on offense, releasing DeMarco Murray and signing Dion Lewis. Delanie Walker and Rishard Mathews offer constant and reliable receiving options. The rest of the receivers are young with plenty of upside. Corey Davis, Taywan Taylor, and Jonnu Smith will help Mariota to improve his passing numbers.

I expect Mariota’s touchdown and yardage numbers to increase in both passing and rushing. As long as he stays healthy, 2018 should become a career year. Look for Mariota to be drafted just outside the first dozen quarterbacks, but I expect him to finish with top-10 numbers. 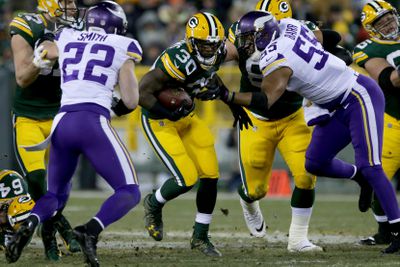 Williams enters his second season with a slight edge to receive the starting position in Green Bay in 2018. He stands to benefit from running back Aaron Jones missing the first two games of the regular season for violating the NFL’s substance abuse policy. Williams also edges out his fellow backs in pass protection for QB Aaron Rodgers. Williams also has an edge in durability over Jones and Ty Montgomery.

Unfortunately, Williams has not shown enough promise to guarantee the feature role, resulting in a drop in draft position. Head coach Mike McCarthy has continued to emphasize that the Packers will have a rushing committee next season. Still, Williams makes the best case to own the backfield. He rushed for 556 yards and four touchdowns and had 262 receiving yards and two touchdown catches his rookie season. Owners can hold off until the middle rounds for Williams. If he takes off the first two games, he will be a fantasy steal. 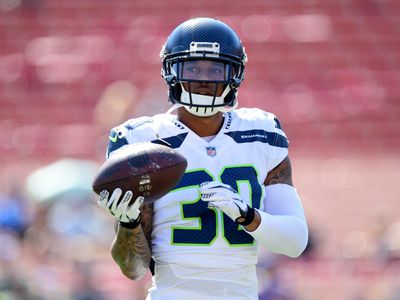 The Seahawks found a gem when they selected Carson in the seventh round of last season’s draft. Carson looked to be the answer to the Seahawks’ running back problems until he suffered a severely broken leg in Week 4 against the Indianapolis Colts. He spent the rest of the season on the sideline after 49 carries for 208 yards and seven receptions for 59 yards and a touchdown.

Now, Carson is back and looking to pick up where he left off. He enters camp facing some stiff competition from first-round pick Rashaad Penny for the starting role. However, the Seahawks coaching staff has high-praise for Carson and head coach Pete Carroll is going to go with the hottest hand. For now, it could Carson’s job to lose. He is a high-end RB2 heading into the NFL kick-off that owners can snatch into the double-digit rounds. 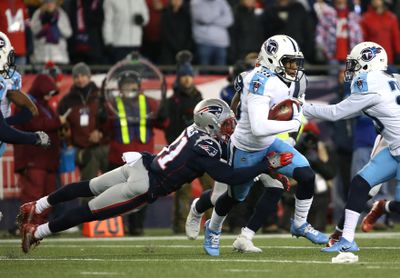 Hitting on a rookie wide receiver is extremely difficult. Davis likely found himself on sleeper lists this time last year, but injuries cost him valuable game time, and he never eclipsed 100 yards receiving nor did he find the end zone in 2017.

So what has changed? For starters, the Titans brought in Matt LaFleur to overhaul the offense. If he brings some of that magic that helped the Los Angeles Rams this entire offense could take a giant leap forward. LaFleur has coached under both Kyle Shanahan and Sean McVay. Two current head coaches known for innovation and getting the most out of their quarterbacks. Tennessee also did next to nothing to beef up their receiving corps. Rishard Matthews is a fantasy asset, but Davis is the better talent and should be the Titan’s premiere weapon through the air. Taywan Taylor is an interesting late-round pick, but a risky play. With a fully healthy offseason and an improved situation, look for Davis to breakout and possibly finish in the top 30 at his position. 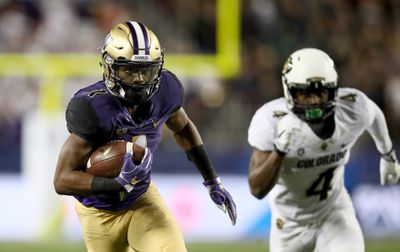 John Ross is more of a deep sleeper (currently going undrafted). Ross was one of the most hyped rookies last year, but injuries limited him to two games with no receptions. The 2018 season figures to be a much more productive year for the speedster and perhaps one where he becomes a weekly fantasy play.

The Bengals’ passing attack is still pretty much just A.J. Green. Brandon LaFell is a 31 year-old wide-out with talent, but there’s nothing special about his game. Tyler Boyd is entering his third year, scattering 73 receptions and three touchdowns across 28 games. Cincinnati needs a legit threat at receiver opposite of Green. Ross does have elite speed, but his route tree is diverse and he can be used more as an offensive weapon (a la Tyreek Hill). Should Ross take advantage of his opportunities you could have a WR3 with phenomenal upside for the price of the final pick in the draft. 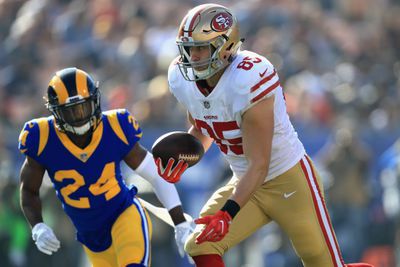 I’m the kind of fantasy player that waits until the final rounds to select a tight end. I’m also the kind of fantasy player completely comfortable using a different TE every week, playing the matchups, and using talent evaluation to make weekly decisions. Kittle is currently being drafted just outside the top 10 so there is a good chance he’ll be on a few of my teams.

So why am I excited about a second-year tight end that only finished with two touchdowns and only two games with five or more receptions? Simply put, I’m a firm believer that the San Francisco offense starts to take off this season with Jimmy Garoppolo entering his first full season as starter. Kittle’s rookie season wasn’t spectacular, but neither were his quarterbacks Weeks 1-12. Garoppolo should be able to keep this offense on the field for longer drives and hopefully more opportunities for the tight end out of Iowa. To take a significant step forward the 49ers will have to convert more red zone opportunities to touchdowns instead of settling for field goals. There isn’t a better red zone option on the team (currently) than the 6’4 250 pound Kittle. Pierre Garçon could also play a role in this aspect of the offense, but he has never been much of a red zone threat. I’m waiting for Kittle in most drafts and he should be a $1 bid in most auctions. 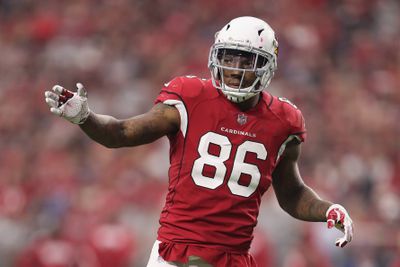 Another second-year tight end that has a strong possibility at breaking the fantasy top 10 is the converted wide-out, Ricky Seals-Jones. Jones blew up for nine receptions, 170 yards and three touchdowns on 16 targets over a three-game stretch in the middle of the 2017 season. That’s not a bad run at all for a tight end, especially one who was undrafted.

The boom factor for Jones is that the normal starting tight end, Jermaine Gresham, tore his Achilles’ at the end of the season and will probably not be ready to go Week 1. That should give Jones significantly more snaps early in the season. Sam Bradford likes to work the middle of the field and Jones has shown an ability to catch in traffic and burn defenders deep down the seam. I’m very interested with what he can do if he sees five or more targets a game. He’s currently going undrafted in most 12 team leagues and will likely be an early streaming option for those that punt the position.

Kingdom Hearts 3 Confirmed As The Longest Game In The Series

Gamers are warned that they will have to put in some serious hours to complete the upcoming Kingdom Hearts III. Expanding the Final Fantasy/Disney crossover into the biggest world yet, Kingdom Hearts III will also clock in as the longest game in the franchise’s history. Finally rounding off Sora’s story some 14 years after Kingdom Hearts II released in Japan, the […]

The brother of a murdered Colorado mom says the woman’s husband, who now stands accused of killing her along with the couple’s two daughters, “stole my whole world.” “My sister and nieces meant the absolute world to me,” Frankie Rzucek, the younger brother of 15-weeks-pregnant Shanann Watts, posted on Facebook early Friday. “They made me strive to be […]